April 27, 2018—In the second week of May, the Somali Federal Government, along with top United […]

April 27, 2018—In the second week of May, the Somali Federal Government, along with top United Nations officials and international donors will meet to agree on ways  of stamping out charcoal exports which provide almost half of the Al Shabaab’s funding. Kismayo is the main port of dispatch for this trade that brought in $10 million in 2017. 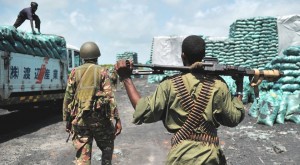 The United Nations says that in 2017, exports of charcoal earned Somalia $10 million, but at the expense of a rapidly declining forest cover.

There have been suggestions of intercepting and seizing merchant vessels ferrying the consignments and calling on governments of the importing countries to stiffen checks at their relevant ports. There have also been repeated claims that some members of the African peace force (AMISOM) are involved in the trade.

UN Security Council sanctions have failed to halt the trade which involves an extensive supply chain. According to the UN, in 2017, Somalia earned $10 million from the sales to the Gulf states and several Asian countries. Other sources say the figure is double that. However, the business has decimated much of the country’s limited forest cover and particularly the acacia trees.

The two-day conference is supported by the United Nations Development Programme (UNDP), UN Environment and the Food and Agriculture Organisation of the United Nations (FAO), with funding from the European Union, Sweden and Italy.

From May 7-8th, 2018, high level government officials led by Prime Minister Hassan Ali Khayre and other experts, will for the first time convene to stop the illegal trade, and unsustainable production and use of charcoal in Somalia.  Peter de Clercq, the Deputy Special Representative of the Secretary General, Humanitarian Coordinator and United Nations Resident Coordinator for Somalia together with Erik Solheim, Executive Director, UN Environment are also expected to attend.