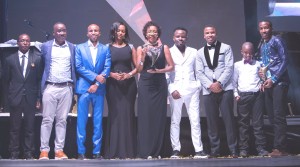 Chisenga (holding one of the trophies) said it is almost impossible to mention youth without mentioning their critical contribution to a future that is defined by innovativeness.

August 15—The Young Achievers Awards winners were announced on the International Youth Day recently culminating in a process that has taken several months, but ended on a glamorous high with the actual handing over ceremony.

The Overall Young Achiever award went to Zilla Mary Arach, the Co-Founder of Lacel Technologies who have developed the Lunda lite and Pig+ Apps which has become a useful tool for farmers.

Humphrey Nabimanya, the Team Leader and Founder of Reach A Hand Uganda said, “The awards overall objective showcases the best examples of young entrepreneurs and leaders who serve as examples for their peers, so that they may inspire an entire generation to do just as much or even more.”

Renown Tanzanian entrepreneur philanthropist, public speaker and leadership coach Ali Mufuriki was named for the Lifetime Achievement Award for building being an advocate for youth empowerment across the East African Region.

Other special award categories were The Young Achievers Star Hall of Fame given to Amelia Kyambadde, the trade minister and who was recognized for demonstrating exceptional commitment and sacrifice in supporting the Young Achievers Awards Program.

Ever since its inception the Young Achievers Awards has established itself as arguably the most prestigious awards’ event of its kind in the region. Past winners and recipients of the award include entrepreneur Nelson Tugume, Scientist and Researcher Godfrey Atuhaire, Musician Keko, Tennis champion Duncan Mugabe and two regional leaders, Yoweri Museveni, President of the Republic of Uganda –  as well as Paul Kagame, the President of Rwanda, who were recipients of Lifetime Achievement awards.

This year’s edition, which was announced on January 23rd, attracted over 300 applicants from various parts of the country that were vetted by two panels of distinguished judges. The first phase involved category judges who assessed the top ten nominees in each category to choose the top 5.  The second phase that involved the audit judges who chose the winners in each of the categories that attracted nominations.

Speaking at the colourful event,  Progress Chisenga, Marketing Director at Vodafone Uganda said, “The very fabric of today’s generation is harnessed on data and the internet of things. It is almost impossible to mention youth without mentioning their critical contribution to a future that is defined by innovativeness.”

She said, “And there is no better platform than the one that JUMP and the Young Achievers Awards offers. JUMP by Vodafone is a social e-learning portal whose sole objective is to encourage young people to share relevant content and drive conversations that will inspire generations.”