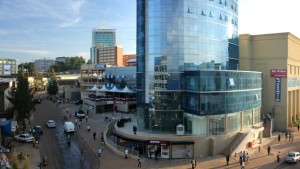 Rapid urbanisation has meant that Kigali City is expanding fast and caused the development of secondary population centres on the outskirts of the capital.

January 12—The World Bank Group says Rwanda’s growth slowed from mid-2016 to mid-2017, bottoming out at 3.4 percent, but is expected to recover to 5.2 percent for the second half of 2017, and may well accelerate in 2018 and 2019 as private and public investment pick up and agriculture becomes more productive.

Aghassi Mkrtchyan, the World Bank Senior Country Economist for Rwanda said,  “Targeting public investment to areas where there are high economic returns is important for maintaining the fiscal space, which has narrowed in recent years, as is addressing fiscal contingencies.”

The World Bank’s Rwanda Economic Update, released this week, says that in the medium-term the economy will benefit from reduced external imbalances and the expected recovery of prices for traditional exports such as minerals, tea, and coffee. Non-traditional exports, supported by the existing competitive exchange rate, may become important sources of growth in the coming year.

In a special section, Rethinking Urbanization in Rwanda: from Demographic Transition to Economic Transformation, the Update analyses the trends and forms of the country’s rapid pace of urbanisation to examine its contribution to economic development. An increase in the urban population has been accompanied by the physical expansion of cities, notably the periphery of Kigali though around secondary cities as well. The report notes that urbanization has been accompanied by non-farm job creation and that this has led to a reduction in poverty primarily in areas with high urban population density and good economic and physical connectivity.

For a sustainable urbanization, it makes some policy recommendations: Rwanda’s towns and cities should be managed as a separate portfolio, with support to Kigali as the leading economy and provision made for other cities

The policy approach to internal migration needs reframing to leverage the gains from population movement rather than simply controlling it. Policies should focus on strengthening the links between rural and urban economies by creating an enabling environment rather than deciding where investments should be located.

Densification is critical particularly in the peripheries of urban areas, where opportunities for connecting the cores of cities to surrounding rural areas remain untapped. Concerns for Kigali’s rapid expansion can be managed through more efficient urban planning, while investment in other cities should focus on improving basic services.

The Update synthesizes recent economic developments and places them in a medium-term, regional, and global context. It analyses the implications of these for policy and the outlook of the economy.