September 29—Legislators in the national Parliament from Eastern Uganda, were recently given a tour of the […]

September 29—Legislators in the national Parliament from Eastern Uganda, were recently given a tour of the proposed one million tonne grinding facility being built by Hima Cement Limited and were unanimous in the praise for the project. 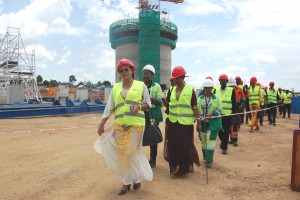 The legislators were excited over the prospects of more job opportunities opening up for people in the vicinity of the project.

Anita Among, the Bukedea District Woman Representative told Hima officials at the site, “As Members of Parliament representing people from Eastern Uganda, we shall do everything within our means to ensure that our investors are protected.

“Our people have been given a rare opportunity to uplift themselves and it is for this reason we shall ensure that investors such as Hima Cement are given the adequate support,” she said.

The $40 million plant is expected to be completed by June 2018 and will more than double Hima Cement’s capacity from the current 800,000 metric tonnes to about 1.8mts. The company is currently the market-leader.

Sheila Byenkya, the Project Head of Hima’s Expansion Project in Tororo said the plant is currently employing between 150 and 200 locals but that number  is expected to rise to between 400 and 500 on completion of the processing unit.

“While sourcing for labour, the locals are given first priority. Currently, we have a few Chinese engineers working on the site temporarily. When completed, the locals will be the majority of the people employed at the plant,” she said.

Fredrick Angura, the MP for Tororo County North asked locals to remain patient as the company works on the final touches. He said those who are not yet employed by the cement maker will find better opportunities when plant goes  online.

“This is a long term investment. One that will lead to the development of not only our infrastructure but also bring about socio-economic benefits. I know there is a huge amount of expectation from our people, but let’s give the investor the appropriate support, because the benefits will be long-term. We have already seen the population around the cement plant growing. That opens up new business opportunities,” he said.