April 26, 2018—Four people are being held over the recent deaths of 11 lions in the Queen Elizabeth National Park, one of the most visited protected areas in the country. Uganda is presently earning just over $1 billion from tourism every year. 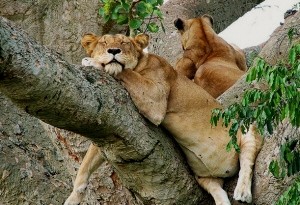 UWA officials said plans are to recruit more park rangers to prevent the kind of incidents that lead to communities in the vicinity of national parks targeting the wildlife.

Sam Mwandha, the recently appointed Uganda Wildlife Authority (UWA) Executive Director, told a news conference, there is need for the agency to have enough rangers in all its national parks if the incidences of poaching and encroaching on the national parks is to be averted.

“Our security team managed to arrest four people in connections with the death of 11 lions. The suspects were found with some chemicals which are suspected to be poison. Currently we are working with the National Analytical Laboratory to carry out tests to confirm  whether the poison is the one they used to poison the Big Cats,” he said.

He said UWA is to recruit about 500 new personnel to beef up the park ranger force and help to address not only poaching, but human wildlife conflicts in the protected areas.

“As UWA, this year we shall recruit about 500 rangers to fill in the personnel gaps at the Authority. Some of our staff retired and others have died. This created big gap at the Authority thus exposing the national parks to encroachers and poachers,” he said.

UWA officials also refuted allegations that the lion population in Uganda has fallen sharply which may adversely affect tourism. Stephen Masaba the Director of Tourism at UWA said, “The incident that happened in Queen Elizabeth should not cause for an alarm because currently there about 130 lions in the national park and about 270 lions in other national parks such Kidepo Valley National Park and Murchison Falls National park,” he said.

On April 11, reports emerged of the deaths of 11 lions in Queen Elizabeth National Park. According to UWA, the lions were poisoned by people from the nearby Hamukungu fishing ground in the park. The lions were considered dangerous to their livestock and yet as a community they were not benefiting from the revenues derived from the tourists who visit the national park.

However UWA denies this.  Mwandha said, “Every year, UWA shares the revenue with the communities through their districts because the law on revenue sharing from national parks recognizes local governments and not individuals. But we shall continue working with the local communities to ensure that they value wildlife.”