May 12, 2017 – Creditors to troubled telecom operator  Afrimax Uganda (trading as Vodafone) are counting […]

Vodafone stopped streaming data on May 11, leaving both corporate and retail subscribers in the latch when provisional administrator Donald Nyakairu announced a decision to liquidate the company’s assets.

Information available to 256BN indicates that Nyakairu was left with no choice but to invoke the least desirable option for both shareholders and creditors after minority shareholder Aim Holdings failed to meet the South African lender’s minimum terms for the buyout.

According to one source who described the company’s affairs as being in a typical chicken and egg situation, Nedbank baulked after Aim Holdings failed to raise the full USD 2 million for the first tranche of the USD 6 million it had committed to inject into the company over a six month period ending September 30.

The outcome represents a net loss for everybody, including Nedbank. Nedbank, the only secured lender, holds USD 13.8 million of Afrimax’s total debt of USD 82.6 million. Although this gives it the first call on the company’s assets whose book value is USD 15.4 million in assets, less than USD 5 million of that may be realised from a sale.

Under such circumstances, unsecured creditors who are owed USD68, 102, 476 would walk away with nothing.

Besides office equipment and vehicles, Afrimax’s other assets are a handful of masts it had set up.

In convincing them to back a share buyout, provisional administrator Donald Nyakairu, told them in a February 26 meeting that allowing the company to continue trading as a going concern was the only viable way of securing the interests of all creditors.

“A sale of the assets and business as a package is likely to realise a higher return than a liquidation,” Nyakairu told the meeting during which he presented a stark picture of the state of affairs at Vodafone Uganda.

Eight percent of its network was offline after mast operators had switched it off, while Vodafone had also terminated the non-equity branding agreement that allowed Afrimax to trade under the name.

Mr. Nyakairu further told the creditors’ back then, that the operation would on average need USD 750,000 per month to run if they agreed to a moratorium on enforcing their claims against the company.

None of those projections has been actualised since the company has been generating only USD100, 000 a month on average since Nyakairu took over. Of that, USD35, 000 was being paid out to Nyakairu as administrator’s fees. 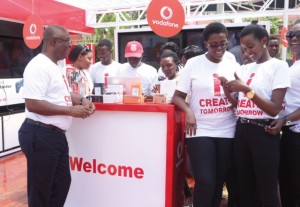