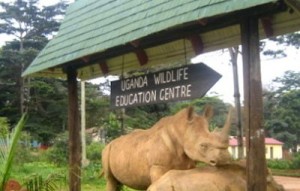 Winners will spend two nights at UWEC and a chance to learn much more about the importance of tourism to Uganda.

May 9— Each tourist staying for more than three nights in Uganda leaves behind about $2000 spent on transport, accommodation and buying artifacts.

USAID, the United States development agency, is holding a competition among students to drive home the point that tourism is a vital sector of Uganda’s economy, but without adequate conservation measures future financial returns will be in doubt.

Annually, tourism brings in just over a billion dollars and currently leads as the country’s export earner. Uganda boasts of about 1000 species of birds and is home to a third of the remaining mountain gorillas, among other natural attractions.

USAID spokesman Abiaz Rwamwiri said, “The entry rules are for pencil use. The work should be done during the holiday season and submitted on the day one reports back to school. This wildlife art competition code named Listen to Young Voices comes at a time when Uganda is facing challenges of climate change, famine and poaching.”

He was briefing teachers and representatives of wildlife clubs about the event. The competition is limited to secondary schools in West Nile, Karamoja, Western Central and South Western Uganda. Each region will submit the best six entries.

The competition revolves around the point that during the ongoing school holidays, students can use their artistic talents to increase awareness among themselves. They also have a chance to win a tour accommodation for two nights at Uganda Wildlife Education Center (UWEC), Entebbe.

However the competition is only open to secondary schools. The artwork must be of a Cape Buffalo, The Crested Crane, a Shoe Bill Stork, Uganda Kob or a Zebra. Submission should be on an A4 mart art paper.

Research has shown that after passing their Uganda Certificate of Education or dropping out of school, many young people see no relevance between protection of biodiversity and economic growth of nature in their lives. This leads them to poaching, charcoal burning and swamp reclamation without a second thought.

“This is one way to interest the youth. If our forefathers were more conscious about wildlife, rampant droughts, floods and unpredictable weather patterns would not be heard about today. We owe future generations the abundance of wildlife in our midst. It is everyone’s challenge to fight that greed for wealth by poachers/dealers of ivory, rhino horns and pangolins,” Rwamwiri.

Titus Muwonge, a wildlife club member in Kampala said, “Swamps are being reclaimed by farmers for rice and construction of houses and yet they are not replaceable. Swamps are homes for; birds, insects and reptiles. I wish every Ugandan planted a tree every year we would have more than 40 million new trees.”