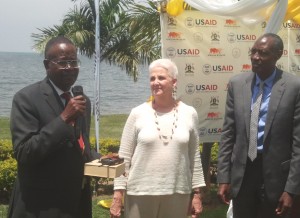 Prof. Kamuntu thanks Amb. Malac for the assistance at a cermony that took place at the Uganda Wildlife Educational Centre, Entebbe.

August 25—The United States government has given assistance to Uganda’s wildlife guardians by providing new equipment including a vehicle to prevent the trafficking of animal trophies.

Presently tourism brings in just over a billion US dollars annually, but last year a published study estimated elephant poaching is costing African tourism $25 million in earnings every year. However, in contrast to other countries, Uganda’s elephant population has been growing due in part to better conservation methods.

While thanking the Americans, Prof. Ephriam Kamuntu said on top of coping with effects of climate change, the government was also faced with more aggressive poachers and any help was welcome.

He said, “The USA government has donated a van to help monitor and track poachers. This is on top of 130 GPS gadgets. These are in addition to police dogs that have in the recent past sniffed and enabled the arrest of culprits trafficking tonnes of wildlife goods, worth so much, in transit.”

The 2016 study paid for by the World Wildlife Fund also found that annual losses to tourism are only a small fraction of the estimated $597 million that ivory from Africa’s poached elephants was worth annually on Chinese black markets between 2010 and 2012.

According to Deborah Malac the US Ambassador to Uganda the assistance is coming through the US Department of State’s Bureau of International Narcotics and Law Enforcement Affairs. Working with the African Wildlife Foundation, the American assistance is intended make it easier for the Uganda Wildlife Authority’s canine unit to move its sniffer dogs and handlers throughout the country.

John Makombo, the UWA Director for Conservation said 12 enablers have been trained and six sniffers dogs have been deployed to help track and investigate dealers of illicit items, particularly wildlife trophies.

“We have impounded cargo comprising of tusks, rhino horns and pangolin scales worth millions of shillings in transit. This van donated to UWA will enable monitor poachers; in Gulu, Karuma, Lake Mburo National Park, Kasese and Busia before they get to Kampala. Better equipment will enable us halt Uganda being used as a conduit for traffickers.”