May 1, 2018 in Business, Companies, Infrastructure, Transport by Editor

May 1, 2018 – Uganda Railways Corporation URC, says operations on the Southern Corridor route are […] 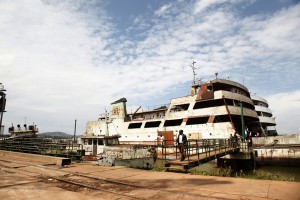 May 1, 2018 – Uganda Railways Corporation URC, says operations on the Southern Corridor route are imminent and could launch in as little as a week

In a brief conversation with 256BN this week, URC Managing Director Engineer Charles Kateba said the staging point from Port Bell 9, kilometres east of downtown Kampala was ready and they were only waiting for cargo.

“We could even start today if we got the cargo and am certain we shall be able to raise a trainload over the course of the next few days,” Kateba said.

URC has set itself an initial target of shipping 20,000 tons per month. Two vessels – MV Kaawa, owned by URC and Tanzania Railway Corporation’s MV Umoja are available to ferry the shipments.

Kateba added that plans to rehabilitate the second vessel MV Pamba were gathering pace while Tanzania has also committed to building a new vessels to join the fleet in about two year time.

URC has been busy revamping Port Bell and opening up the link line to Kampala in recent months.

Despite a longer distance, the southern route that runs through Mwanza to Dar es Salaam remains popular with shippers because it gives them an alternative to the congestion typical of Mombasa. It had gained traction but lost momentum after a 2005 collision that saw URC’s MV Kabalega sink in the lake while MV Pamba which limped back to port has not been fixed since then.