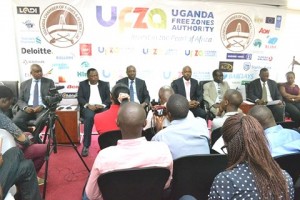 Kwamya (third right) was one of the officials fielding questions during a news conference in mid-week chaired by Karuhanga (third left).

September 28—Uganda’s mining artisans have been given a lifeline in the form of free know-how being offered by a UN agency.

The United Nations Development Program (UNDP) is spending $13.1 million on training and developing small and medium enterprises involved in the mining sector. The ultimate aim is to increase productivity and competitiveness.

“Small enterprises in the mining sector in Uganda and other African states have no access to markets hence the low productivity of the sector. This training is aimed at improving the skills of these small enterprises so that they are able to competitively trade their small minerals to develop themselves,” Wilson Kwamya, the Team Leader Inclusive Green Growth Program with UNDP said. Training has already begun with 160 people and another 160 have been listed to follow.

The training is being coordinated by the African Caribbean and Pacific (ACP) Secretariat in Brussels, but financed by the European Commission and UNDP which is also implementing the scheme.

UNDP is targetting micro and small enterprises; associates and chambers of mines; civil societies in countries that are under ACP like Uganda, Zambia, Guinea, Cameroon Fiji and Jamaica. The training is expected to build their capacity in areas of environmental protection, health, standards conflict resolution as well as how the small enterprises can commercialize mining.

Kwamya said, “At the end of the training, the participants are expected to have acquired skills in mine and quarry management; environment, health and safety, entrepreneurship skills,   market analysis and investment promotion; geo-data and maps design, community relations and addressing grievances.”

He was one of the officials during a news conference organized by the Uganda Chamber of Mines and Petroleum (UCMP) fielding questions on preparations for the 2017 Mineral Wealth Creation Conference scheduled for Kampala next week.

With the theme ‘Minerals knocking on the door for economic transformation of Uganda’, the conference will be attended by high profile speakers in the sector from around the world as well the local players who will meet to discuss, share knowledge and brainstorm on how to transform African countries.

UCMP chairman, Elly Karuhanga, said the conference is mainly intended to propagate and sensitize Ugandans and foreigners to take interest in minerals in Uganda for economic development and the well-being of the people.