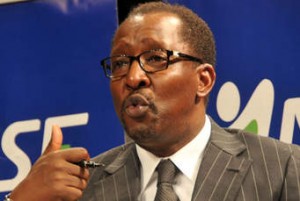 Kampala November 17 – After opening to a barren market when trading in its stock resumed on Wednesday, the Umeme counter gathered wind in trading today, moving 498,891 shares at Ushs489 each according to the USE daily market brief.

There were no bidders or offers on Wednesday, the day the suspension in trading in the power distributor’s shares was lifted on the USE and the Nairobi Stock Exchange. The suspension was granted after Actis’ proxy Umeme Holdings and the National Social Security Fund asked for a hiatus to allow them conclude a private placement in which NSSF became the majority shareholder in the company after it acquired an additional 7.5 percent of Actis stock taking its overall shareholding to 23 percent.

NSSF paid a discounted price of Ushs 59.4 billion for the stake. NSSF Managing Director Richard Byarugaba described the acquisition as strategic to the pension fund’s investment drive. “Umeme enjoys attractive future prospects, making it a key holding in our equity investments portfolio. The company plays a critical role in
enabling economic growth and the development of Uganda through facilitating access to electricity. The ever increasing demand for electricity should lead to higher earnings for the company, and in turn a good yield on the Fund’s investment,” Byarugaba said.

The Fund plans to bring investments in equity to 25percent of its total portfolio as part of a diversification strategy.

Umeme Managing Director Selestino Babungi, described NSSF’s investment as a strong statement of the confidence it has in Umeme and its management.  “We are proud of the Umeme brand and its ability to attract credible investors which can be attributed to our high standards of corporate governance, highly
talented team and our immense contribution to the growth of the energy sector,” Babungi said.

Patrick Mweheire, Stanbic Uganda’s Chief Executive, the transaction advisors, said the successful placement represents a milestone in the evolution of Umeme’s capital structure, a journey which involved an Initial Public
Offer (IPO) in which 39 percent of the company’s stock was put on the market in 2012 raising $67million and a secondary block trade and retail offer in 2014 where 46percent was traded for $99 million and a final block
trade through an accelerated book build (ABB) and retail offer in 2016.

The public can now become shareholders in Umeme by buying some of the available shares worth a total value of $5.2 million. Customers can also purchase the 37,349,155 available retail shares at a discounted value of Ushs 488
per share.