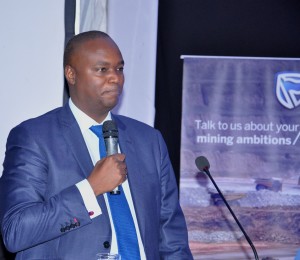 Mweheire told participants at the oil and gas supply chain conference, SBU is already playing its part in helping local companies to become more proactive about the opportunities.

November 21— Stanbic Bank Uganda (SBU) in partnership with the Energy Industries Council (EIC) and the British High Commission in Kampala, hosted a high-powered delegation from the United Kingdom who were in the country to introduce British oil and gas goods and services, to locals and also look into potential joint venture partnerships or other strategic alliances.

Patrick Mweheire, the SBU Chief Executive said, “The UK is a key trading partner for Uganda given the common history we share together and London’s position as one of the world’s premier financial capitals. British companies are therefore well positioned to be valuable participants in the development of Uganda’s hydro-carbon sector.”

The theme for the half day conference was ‘Unlocking opportunities in the oil and gas supply chain’. Ugandan-born, Lord Dolar Popat, who led the delegation as the British Prime Minister’s Trade Envoy to Uganda and Rwanda said, “I am delighted to be leading the EIC delegation to Uganda. Britain’s oil and gas industry has tremendous expertise and Uganda’s growing energy market-with a planned refinery, pipeline and field development projects, is a perfect place to engage in opportunities.

Lord Popat, whose family relocated to the UK when he was still very young said, “As is the theme for this conference, it is important that oil and gas develops Uganda and UK companies are here to support that.”

Peter West, the British High Commissioner to Uganda said during the past nine months several UK delegations have visited Uganda which reflects Britain’s commitment to revitalise its trade and investment links. Recently, Dr Liam Fox, the UK International Trade Secretary was also in Kampala. West said the UK is running a number programmes under the DfID that cater for capacity building. “We are looking at long term growth and the private sector is the cornerstone of it all. As the British High Commission, we want to play a complementary role to see that partnerships and relationships are developed between UK firms and Ugandans to do business here,” he said.

Over $15 billion is projected as investment required for the full development of Uganda’s oil and gas industry. This is expected to peak in 2030 with 300,000 barrels being produced on a daily basis. Over 80% of the budget has been earmarked for the development of related infrastructure, an oil refinery and a 1,445 kilometre pipeline recently launched by the Presidents of Tanzania and Uganda. 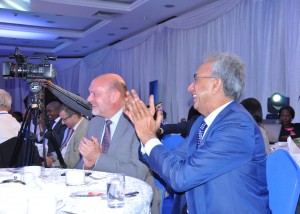 Peter West, the British High Commissioner to Uganda (left) and Lord Popat respond to a joke by Mweheire during the conference in Kampala.

Mweheire said, “As a bank, we firmly believe the oil and gas sector is one of the catalysts that will proactively lead Uganda’s economic transformation given the multiple sub-sectors it touches. This will only happen if local companies are given the opportunity to participate as active partners in its planning, execution and development.”

“Stanbic Uganda is already playing its part to make this possible and has hosted several local content awareness workshops, collaboration conferences and forums aimed at up-skilling local players and fostering partnerships,” he said.

SBU, alongside Japan’s Sumitomo Mitsui Banking Corporation were appointed as joint financial advisers for the proposed oil pipeline between Hoima in western Uganda and Tanga port in Tanzania. The banks hope to raise $3 billion for the project in the second half of 2018 as Uganda prepares to start oil production by 2020.