Uganda’s social fund to be boosted by new law 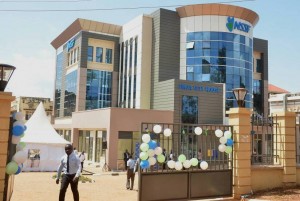 The bulk of NSSF investments is in fixed income like government securities, but the six percent that goes in real estate development, is seen as bringing in good returns as well as bridging a housing shortage.

July 2, 2018—The National Social Security Fund (NSSF) is to be given a boost according to provisions of the Social Security Act that would mean expanded coverage and automatically higher levels of cash contributions under the mandatory scheme which currently has just under a million active members.

“I am aware that Cabinet recently passed a resolution to amend the existing NSSF Act to extend social security coverage to more Ugandans not covered under the existing law. I look forward to receiving this Bill and will talk to concerned parties to make sure it is tabled in time,” Rebecca Kadaga, the Speaker of Parliament told guests and staff at the official opening of the NSSF’s latest commercial property, Jinja City House in Jinja town last week.

NSSF managing director, Richard Byarugaba said the project is a step towards realising the Fund’s real estate strategy, focusing on creating value for its members by constructing commercial buildings and housing estates in major towns in Uganda.

“We have invested in a number of projects that are bringing returns to our members. We are contributing to the growth of the economy by providing long term capital for the private sector,” he said, but also asked the government and legislators to speed up passage of the proposed Act to improve NSSF effectiveness. Towards the end of last year the government sheled plans to open up the pension sector and instead maintained the NSSF monopoly for mandatory monthly payments.

NSSF which holds about a third of Uganda’s cash, now has an asset base of UGX7.9 trillion (some $2 billion) and it invests in three major asset classes, 77 pc  in fixed income, 17 pc in equities and six percent in real estate. Members are presently getting 11.23 pc on their deposits.

The three-stored building is located at the heart of Jinja town and has a total built-up space of 1500 square metres of which 1200 sq mts will be let. It is a mixed use development with commercial facilities, office space and retail shops.

Other projects include the Mbuya I and II development valued at about UGX 14.9 billion ($3 million) which is expected to be completed in two months. There is also the Lubowa Housing Project that kicked off last September and the Mbarara Mixed Development Project due for completion by the end of this year.