July 25— Uganda’s economy remains wobbly with the GDP growth rate at 2.5 percent by the […]

July 25— Uganda’s economy remains wobbly with the GDP growth rate at 2.5 percent by the end of March 2017, compared to 5.3 percent during the same period last year, but there is hope once spending on developing the oil industry gathers pace things will turn around. 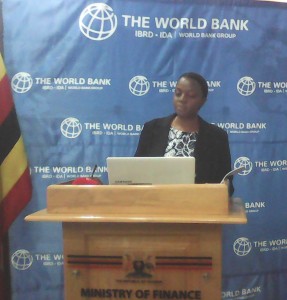 Sebudde said public-partnerships could make provision of new infrastructure easier, but the details and management have to be well defined and respected.

Meanwhile the government is faced with a widening fiscal deficit to pay for much needed new infrastructure for the country to remain competitive as an investment destination.

Sluggish growth, which has been the lowest in the last 10 years, has been largely blamed on the long drought last year that saw the agriculture sector record a negative growth of 3%.

Businesses were also hit by high lending rates and a credit squeeze even as Uganda’s  most important export market, South Sudan, descended into, insecurity.

The latest Uganda Economic Update released by the World Bank office in Kampala today shows currently there is a shortfall of nearly $1.4 billion in financing per year, equivalent to 6.5 percent of its Gross Domestic Product (GDP).

Titled, Infrastructure finance deficit: Can public-private partnerships fill the gap? the report concedes growth has slowed sharply nowhere near the earlier projected 4.5 percent, but GDP is still expected to rise to 5.2 percent in FY 2017/18, and to six percent in the following year.

David Bahati, a junior Minister in the finance ministry said the government was doing everything possible to accelerate economic growth and improve individual incomes for Ugandans.

“If we can take advantage of the available resources, I am sure that we will achieve this projected growth rate or even better because we have the ability. However we still have challenges to deal with like reducing lending rates as well as improving on the infrastructure,” he said.

Economic recovery is likely to be propelled by the development of oil-related infrastructure following the issuance of long-awaited oil exploration agreements.

According to the report, this infrastructure includes an oil pipeline that will be jointly developed with Tanzania, an oil refinery in western Uganda, and a Standard Gauge Railway to the Indian Ocean. The construction and services sectors will continue to be the main drivers of growth.

However, the report cautions the government’s renewed tendency to grant tax exemptions and the low rate of collecting taxes—now at 13.5%  of GDP—could undermine its ability to provide services and support faster growth.

‘Combined with poor return on public investments, this could make it difficult to service the country’s growing debt. Other risks include unpredictable weather that could affect agriculture, uncertainty over the Kenyan elections, and continued strife in South Sudan, all of which could affect the economy significantly,’  the report reads in part.