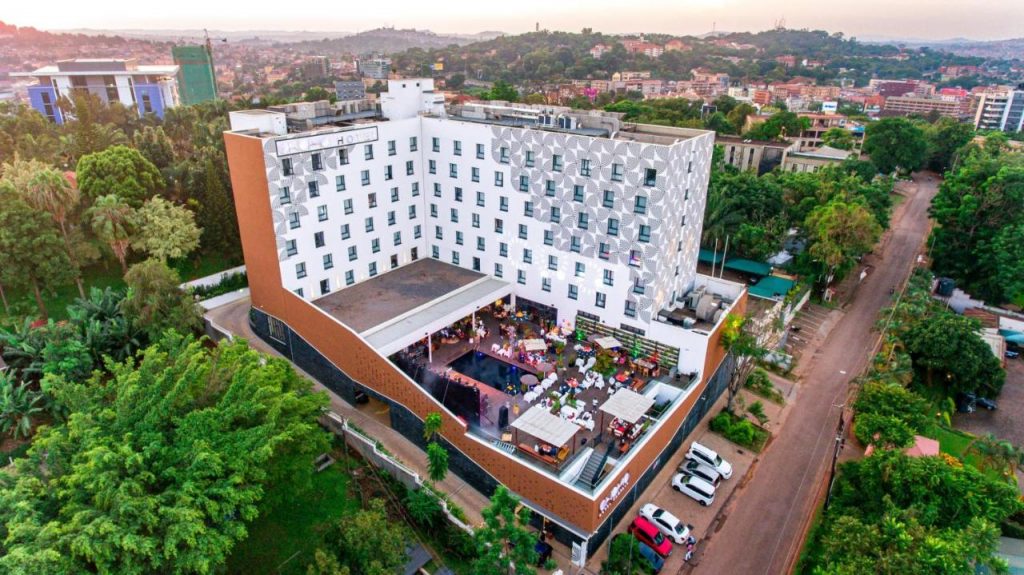 The Hotel Onomo on Nakasero hill

Uganda will see a huge boost to hotel rooms in the coming months as key projects under development reach completion. The country has made a huge comeback in the regional hotel investment pipeline, accounting for just over 11pc of hotel rooms under development in Ethiopia, Kenya, Rwanda, South Sudan, Tanzania and Uganda.

At a project level, Uganda accounts for 10.8pc of the bricks and mortar and 11.4 of rooms in the eastern Africa pipeline. Burundi does not have a single planned or active hotel development. Although the report does not give details of the brands behind the developments, it is understood that emerging African hospitality chain Hotel Onomo, JW Marriott, Hilton, Latitude Zero and Nobu hotels, are some of the active projects. Latitude Zero is already open in Makindye while the Onomo has completed structural works and furnishings.

According to consultancy W-Hospitality Group’s Africa Hotel Pipeline Report for 2022 that was initially released in March, there are a eighty-three active or planned hotel projects with 12,076 keys in the six countries that make up the East African cluster.

Ethiopia accounts for the lions share with 29 projects totaling 5,026 keys. Kenya comes next with 24 projects and 3,155 keys. It is followed by Tanzania with 11 projects that will add 1335 rooms to the market. Uganda comes fourth with nine projects worth 1376 rooms. Rwanda weighs in at six projects with 597keys, followed by South Sudan at four projects and 587 rooms. New EAC entrant Democratic Republic of Congo, has ten projects with 1341 rooms, of which 43.8pc are in the construction phase.

Uganda however, stands out because of a higher actualization rate. A high 97.1 percent of projects are active with only 2.9pc at the planning and pre-construction phase.  In contrast, Rwanda has only 30.5pc of its projects active, Tanzania 34.5pc, South-Sudan 60pc, Ethiopia 74.4pc and Kenya 77.7pc.

At the continental level, the African hotel chain development pipeline totaled 447 hotels with 80,291 rooms as of March 2022when the report was published. The continent is divided into two regions – North Africa ( Morocco, Algeria, Tunisia, Libya and Egypt) and sub-Saharan Africa(49 countries, including the Indian Ocean islands).

“Although the pipeline total is above the 2020 and 2021 figures, sub-Saharan Africa is falling behind, with fewer rooms in 2022 – the growth has been entirely in North Africa, specifically in Egypt, which on its own has seen growth of 40 pc in pipeline rooms. Of the six sub-Saharan countries in the top 10 only Cape Verde has seen an increase (33 pc), whilst the “power houses”, i.e. Nigeria, Ethiopia, Kenya and South Africa have between them seen a decline of 29 per cent (Nigeria is down 41 per cent),” said Trevor J Ward, the Managing Director of W Hospitality Group.

Egypt tops the table with 85 projects that are designed to add some 21,281, of which 28.9pc were active at the time of compiling the report. Morocco is running close to Egypt’s tail, with 50 projects designed for 7,209 keys and Nigeria -33 projects with 5619 rooms.

Howard says there are many reasons to be optimistic about the future of the hotel industry in Africa. “With some exceptions, the countries of Africa are lagging behind Europe, the Americas et al when it comes to the hospitality industry, but whilst the scale is small (the development pipeline in China, one country, is almost nine times that in Africa’s 54 nations!) the opportunities are there, and not to be ignored.”

This year’s report is based data from 42 international and regional hotel chains, reporting their pipeline activity for 120 of their brands for which they have signed deals in Africa. Development activity continues to be concentrated in city centres, where 331 hotels of the total 447 in the pipeline (74 pc of the deals and 72 per cent of the rooms and resorts” account for nearly all of the balance, 23 per cent of deals and 26 per cent of rooms.

“There are only 12 hotels planned at airports in the whole of Africa, curious considering the importance of air travel on the continent. Most of the new resort signings have been in the traditional tourist magnets of East and North Africa, but the Republic of Benin in West Africa has two new resorts coming, from Banyan Tree and Club Med, which will put this relatively new destination on the international map,” the reports says in part.