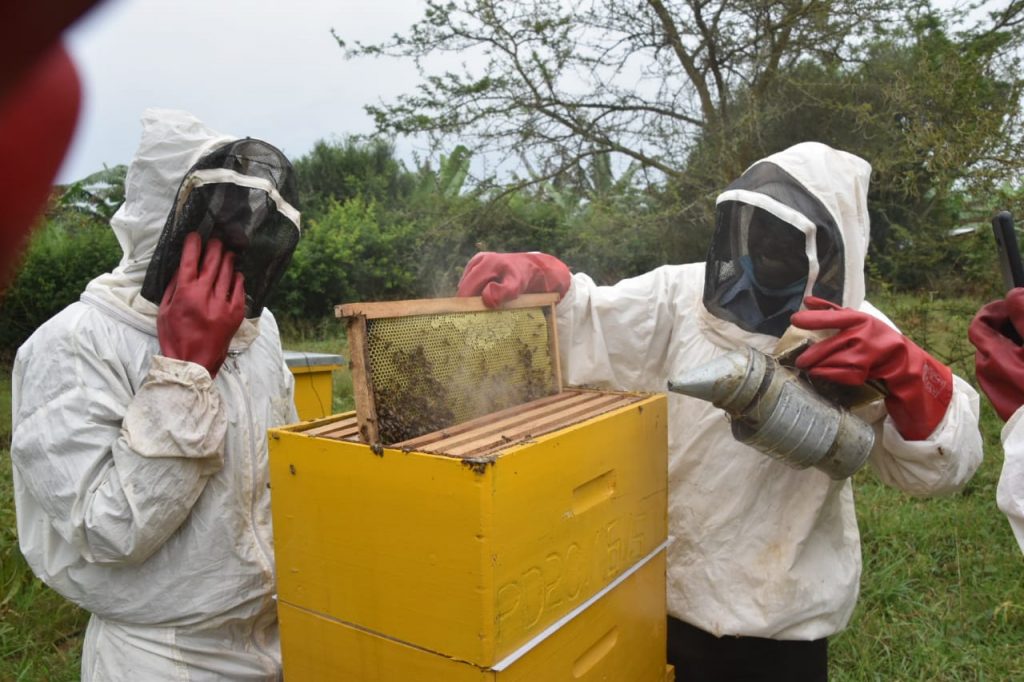 Trainee beekeepers check for maturity of a honeycomb from a Pearl Dairy partner farmer in Sanga, just 35 kilometres north-east of Mbarara City

Ugandan milk processor Pearl Dairy is targeting a slice of the European Union’s $1.5 billion a […]

Installation of a honey processing line is nearing completion at its Mbarara factory site while the initial batch of farmers recruited into the pilot are expecting their first harvest next month.

According to Michael van den Berg, the head Dairy and Apiculture Development at Pearl Dairy, the diversification project was started last year, to cushion farmers against loss of income following the ban by Kenya on milk imports from Uganda. The Kenyan action which was later modified to a quota system, sent farmgate prices crushing in western Uganda, forcing some farmers to drop out dairy farming.

Some 200 dairy farmers were recruited into the apiary project with each given 5 hives to manage under a revenue sharing scheme with Pearl Dairy. A consultant was also hired to train youth in apiculture.

“This is going to be the largest commercial apiary project in East and Central Africa. Uganda has a 5000-tons a year honey export quota to the EU but this is barely exploited” Van de Berg told 256BN.

He added that Ugandan honey would attract a premium in the EU market because unlike bees in the western hemisphere which pick nectar from farmed crops such as sunflower, African honey in comes from natural vegetation.

The initial results which show hive colonization rates above 90pc, have encouraged Pearl Dairy to scale up the project with a target to reach 20,000 hives in place over the next three years. The processing plant has been configured to produce 20 tons a day and will only offtake raw honey from partner farmers.

Van de Berg says they will not accept honey from sources outside their own controlled value chain because of poor apiary practices which impact the quality of honey.

“A lot of the honey on the local market has a smokey taste because of poor harvesting methods. Sometimes, honey is also harvested before it is mature which affects its shelf life,” he explained.

Ernest Simeoni, the chief executive of Kenya based African Beekeepers limited which has been retained as consultant by Pearl Dairy, says the market for honey in East Africa is undersupplied, resulting into abnormally high prices for the product.

“The challenge is that you tend to have honey-hunters rather than bee farmers across most of Africa and that is because the sector is under-developed. This project is the first and largest vertically integrated apiary project in east and central Africa and am really excited about its prospects,” Simeoni, a 26-year veteran in the commercial apiary industry says.

He explains that while there are millions of hives in the region, the lack of proper husbandry practices makes production inconsistent. This has translated into a huge supply gap and market opportunity for honey even within East Africa. For instance, the Java coffee shop chain requires 7 tons of honey a month for its outlets in Nairobi alone. Most of it is imported.

With just under 2.2 million hives, Tanzania is the only African country listed among the top ten producers of honey in the world. India is the global leader with 12 million hives followed by China at 9 million.