October 31—Uganda’s inflation numbers were down in October reflecting an improving supply situation due to good rains for the country’s agriculture sector, the mainstay of the economy. 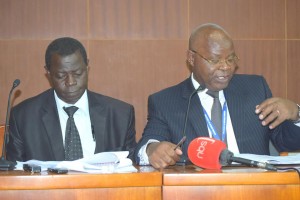 Dr. Mukiza (right) said good rains across the country helped farmers supply markets with an abundant supply for food items which in turn kept prices down.

The Annual Headline Inflation for October 2017 dropped to 4.8% as compared to 5.3% that was recorded in September 2017 while the Annual Core Inflation fell to 3.5% from 4.2%. A drop in the core inflation tends to signal more easing of the base lending rate as managed by the Bank of Uganda through the Central Bank Rate now at 9.5%.

“We saw a decline of prices for food items in most towns across the country,  because of the good supply of food items on the market. The improved production in the agriculture sector was due to good rainfall,” Dr.Chris Mukiza, the Director of Macroeconomic Statistics at the Uganda Bureau of Statistics (UBOS) said early this week.

He  said the country experienced a good supply of food products on the market which reduced the pressure on prices and leading to the decline of annual inflation.

However according to the latest report,  the Annual Energy, Fuels and Utilities (EFU) Inflation increased to 14.1% in year ending October 2017 as compared to 10.6% recorded in September 2017. This was due to the Annual Inflation for Solid Fuels (Charcoal and Firewood) that increased to 25.0% in October 2017 as compared to 15% recorded end of year September 2017.

Food items whose prices went down in across the country included bananas in Western and Central region; maize flour, vegetables and fruits.