August 23, 2018—Management at Uganda’s mandatory contributory scheme, which currently has assets close to $3 billion, has reported a significant upturn in members payments for 2017/18 financial year. 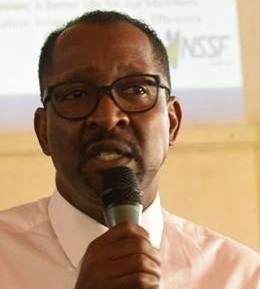 Byarugaba said improved compliance played a significant role in the higher contributions during 2017/18.

The National Social Security Fund (NSSF) was able to collect UGX1.6 trillion ($426 million) as members’ contributions reflecting a 77 pc growth over the previous year when UGX 912 billion was collected.  NSSF is also the country’s biggest institutional investor with holdings in Umeme, the electricity distributor and Kenya’s Safaricom.

Fund managing director Richard Byarugaba said on Wednesday, “The increase in total contribution is attributed to improved compliance levels from 80 pc to 81 pc, the new voluntary savings scheme, customer satisfaction rates standing at 85 pc and the additional new members that have joined the Fund.”

Employers are mandated by law to deduct 5 percent of their employees gross salary and add another 10 pc for monthly contributions to NSSF.

Byarugaba told a news conference there was an improvement in almost all its financial indicators in concluded financial year and He expects to announce an impressive interest rate for its members at the upcoming AGM set for next Tuesday, August 28 2018 in Kampala.

“All total assets under management also hit an impressive UGX9.98 trillion ($2.6 billion) as of June 30, 2018, a 26% increase from UGX7.92 trillion ($2.1 billion) in the previous financial year. The fund also saw an increase in benefits paid to qualifying members from UGX 289 billion  to UGX360 billion in this financial year” he said.

He said although Uganda’s economy experienced some setbacks like a deteriorating shilling against the US dollar, unstable interest rates, growth has recovered to 5.8% from the 3.9% seen in 2016/17.

NSSF is a major developer of real estate, both commercial and residential and recently unveiled a high profile office complex in Jinja town, eastern Uganda. 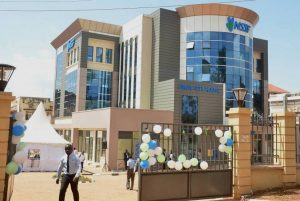 NSSF is major developer of real estate, both commercial and residential and recently unveiled a new office complex in Jinja town, eastern Uganda.

“This means that the investment environment has improved at a macro level. We are also aggressively taken up investment opportunities especially in Kenya and Tanzania. We have also controlled our administrative costs at a 1.3 percent,” Byarugaba said.

NSSF has 2.2 million members although only about 900,000 of these are active contributors. Its investment portfolio is in three categories with 75.33 pc in fixed income, 18.09 pc in equities and 6.5 percent in real estate.

However Byarugaba said there will be a decrease in the total fixed assets to 70 pc, increase equity investment to 25pc and decrease real estate share to 5 percent.