August 21—The Executive Director of Uganda Petroleum Authority, Ernest Rubondo, has said there is need for […] 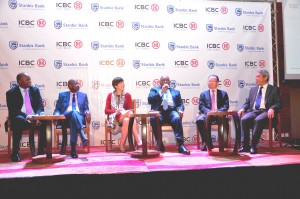 August 21—The Executive Director of Uganda Petroleum Authority, Ernest Rubondo, has said there is need for local investors to partner with international companies in order to tap into the country’s oil opportunities.

“This will allow the local companies to scale up their operations a lot faster and give them better chances of new businesses in the mineral and other sectors at a minimal cost,” Rubondo said.

Rubondo said although the government has already put in place policies and procedures to ensure that Ugandan companies actively participate in the oil and gas sector development, these policies may not be helpful if the Ugandan companies lack the capacity and capital to exploit them. He asked local companies to look for international partners who have specialized skills and resources that might help them.

Rubondo was speaking during an oil and gas business forum that was hosted by Stanbic Bank Uganda (SBU) in partnership with the Industrial Bank and Commercial Bank of China Limited (ICBC) late last week in Kampala. ICBC is the world’s largest bank and most valuable bank by market capitalization,

Rubondo said China has been a great partner to Uganda in infrastructure development and other sectors hence the need for greater cooperation between Uganda and Chinese companies.

Speaking at the same function, Patrick Mweheire, the SBU Chief Executive,  said that the oil and gas sector is Uganda’s best chance to finally grow its economy to a middle one. “The confirmation of commercially viable qualities of oil and gas in Uganda has created a lot of interest and could potentially be the game changer as far as transformation of our economy is concerned,” he said. 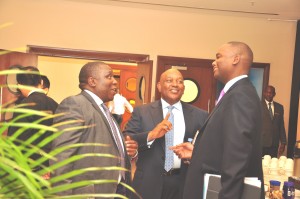 Jimmy Mugerwa, the Tullow Oil Uganda General Manager has a chat with Mbire and Mweheire at the conference

He said the conference is an opportunity for Ugandan companies and their Chinese counterparts to get in-depth understanding of possible partnership opportunities. Local enterprises can also be guided on what it will take to participate in the sector and give valuable business insights from the two financial giants who are uniquely placed to help them ahead in the oil and gas sector.

“Stanbic Bank and ICBC have enjoyed a long standing relationship in providing financial solutions to small and medium and large companies doing businesses between Africa and China. We offer financial guidance and well as assistance to our customers and we are prepared to help our customers with their financial needs as Uganda gets ready to tap into the oil and gas sector.

In 2007 with ICBC bought a 20% stake in SBU parent, Standard Bank. The move has created a strong bond and a unique link between the two markets.

Speaking about the role of ICBC and Stanbic in the oil and gas sector, Wang Lubin, the Chief Representative ICBC Africa said; “ICBC and Stanbic Bank are uniquely placed to play a leading role in the development of the oil and gas sector. We have been working with the government and other private companies who are executing a number of oil related infrastructure development projects and have vast experience working together on large scale projects across the continent.”

Lubin said, “To date, Stanbic Bank and ICBC have jointly financed deals worth $15 billion dollars between Africa and China. We therefore encourage Uganda and Chinese business companies to trust us, because we are the only banks viable to help these kinds of deals succeed.”

Uganda’s oil and gas sector is expected to attract an investment of about $14 billon with the majority of it going to infrastructure development. Recently, SBU was appointed alongside Mitsui of Japan as joint financial advisors for the 1,445 kilometre Uganda-Tanzania $3.5 billion crude oil pipeline.

Not long ago, Ugandan President Yoweri Museveni and his Tanzanian counterpart John Magufuli, commissioned the beginning of construction.“A lot of activities are going on, a lot of tenders are being made” and expectations are that the final investment decision for the pipeline project will be made in the first quarter of next yea,.” Mweheire said.