June 8, 2018—Ugandans are eating 10 times less meat than the global average, but maintaining acceptable standards also continues to be a problem to the extent that not long ago, butchers in Kampala were nabbed using chemicals intended to freshen the look of their products on display. 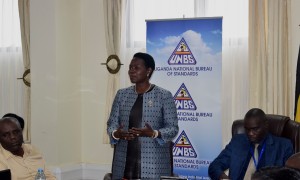 A former Codex official in Uganda, Mrs Awilo Ochieng Parnet, said food safety must be on the political agenda.

During a National Stakeholders Meeting held in Kampala on Thursday to mark the World Food Safety Day, the Uganda National Bureau of Standards, Deputy Executive Director in-charge of Compliance John Paul Musimami, said: “The meat industry is still faced with poor infrastructure in addition to poor practices that do not conform to standards.”

Two months ago, the European Union committed $17 million over five years to revamp the country’s beef industry and bring it in line with global best practices beginning with teaching farmers how to rear better quality livestock.

While sales of beef are on the rise, the annual per capita consumption is still below the internationally recommend level. It is estimated that consumption in  Uganda  is at six kilogrammes far below the 50 kgs  recommended by the United Nations  Food and Agriculture Organisation (FAO). On average a kilo of meat is presently selling at $2.50 which the majority of household heads find not affordable and will only choose to spend only for special occasions. Beans are the main source of protein in Uganda.

Musimami highlighted the practices that worked against meat quality including use of agro-chemicals to preserve it and insecticides to ward off flies as well a the recent Listeria outbreak linked to pre-packaged and ready-to-eat meat products imported from South Africa. The leading sources of Listeria are ready-to-eat deli meats and hot dog together with refrigerated pâtés or meat spreads.

Musimami asked all those involved in the meat value chain to improve their operations to safeguard the population from risks associated with consumption of unsafe meat and meat products.

Industry leaders, like the Uganda Meat Producers Cooperative Union (UMPCU), have been trying to get beef into Uganda’s regular basket of exports especially to the Gulf states and Middle East.  UMPCU been raising funds to build an export standard abattoir since 2010.

It registered a business company, Uganda Farmers Meat Company (UFMC) to spearhead the process. UMPCU/UFMC are currently implementing a joint project ‘Sustainable Livestock Business development projec’” with Norges Vel and Nortura, paid for by Norad since 2016. Under the project; due to end in December 2019,  land has been acquired, an animal holding ground constructed in Nakaseke district and slaughter line equipment was donated by Nortura.

He said working with sector players, UNBS has developed standards for different meat products and codes of practices to guide operations at various stages of the value chain. “In the development of standards, UNBS always strives to engage all relevant stakeholders to ensure that the resultant standards are applicable to the nation,” he said.

UNBS has also signed memoranda of understanding with Kampala Capital City Authority (KCCA) and Kampala Butchers and Traders Association (KABUTA) to enhance cooperation and effective use of the available resources to improve the hygiene and safety in the beef industry.

As part of implementing the MoUs, UNBS has carried out joint sensitisation and enforcement of standards in the industry which has already produced improvements in hygiene.

The Former Chairperson of the Codex Alimentarius Commission, Mrs Awilo Ochieng Pernet, thanked UNBS for its work in ensuring compliance to food safety standards. “Food safety must be on the political agenda, because unsafe food results in negative, social, economic and development consequences. However it shouldn’t be a discussion in air conditioned rooms, but be discussed at grassroots to decision and policy makers,” she said.