Ugandans being pushed to use Kenya SGR freight

November 23—Ugandan importers/exporters using Mombasa port are being nudged towards shifting their cargo onto rail as the Kenya government implements plans to reduce road freight by almost a half along the busiest segment of the Northern Corridor. 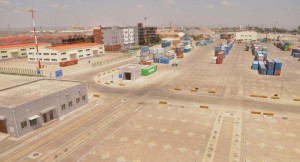 The up-graded Embakasi Inland Container Port is projected to handle just over 400,000 TEUs annually and it is where trucks to and from Uganda are expected to terminate.

“Ostensibly, the Kenyan government wants to drastically limit the wear and tear along the Mombasa Highway, but we have been told there is also pressure to make the shift, because freight income is vital for helping the government pay back the Chinese loan,” a logistic manager told 256BN during mid-week.

He said, “The transition period might be chaotic and this is where both the forwarders and customers may face some initial losses through delays. I hope not, but in cases like this in which coercion is  a factor, it will most likely happen.”

The measure comes in effect on January 1st and according to sources, several freight forwarding companies have informed their long-term Ugandan clients to prepare for this change. Loading and unloading of goods will be done at the upgraded Embakasi Inland Container Depot (ICD) where works are currently nearing completion by China Road and Bridge Corporation. The facility is run by the Kenya Ports Authority (KPA) who also hope the frequent periods of congestion at Mombasa will substantially diminish.

As an incentive, Kenya Railways Corporation (KRC) announced during September that each 20 foot container (TEU) will be charged $500 on the standard gauge railway (SGR) compared to between $850 and $1000 road haulers ask for. The SGR between Mombasa and Nairobi cost $3.4 billion paid for through a loan from China’s Exim Bank.

Earlier this month Atanas Maina, the KRC managing director said, “The freight service will lower the cost of cargo transport by up to 35%. Full commercial operations will start once tariffs are approved.”

Since railways typically have high fixed costs, KRC has to drum up business fast to establish the SGR’s financial sustainability.

Trucking firms serving the hinterland markets of the Democratic Republic of Congo, Rwanda, Uganda and South Sudan have also been advised to strengthen their operations in Nairobi since it will take over from Mombasa as the major hub. According to the the KPA Uganda consistently maintains its leading position in the transit market segment accounting for more than 80% of the container traffic.

A double stacked configuration is being planned for the ferrying of the containers. The SGR cargo line will run freight trains with 54 double-stack flat wagons, carrying 216 TEU per trip, with a load of 4,000 tonnes on each train. The ICD will handle 405,000 TEUs per annum.