June 21, 2018—The government has given dealers and individual buyers a September deadline to complete their […] 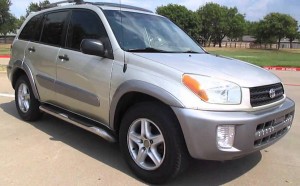 The 2003 Toyota Rav4 model stills looks stylish on Ugandan roads today, but at the end of September, imports of these cars will not be allowed.

June 21, 2018—The government has given dealers and individual buyers a September deadline to complete their purchases before a ban of vehicles older than 15 years comes into effect. Uganda imports between 3500 and 4000 cars every month with at least 50 pc falling in this age category.

Dicksons Kateshumbwa,  the Commissioner for Customs at the Uganda Revenue Authority (URA) said on Tuesday beyond September, URA will not allow in such vehicles due to stricter environmental rules.

“If you are still planning on importing a used car that is 15 years and older you have up to September after which you will not be able too. This is aimed at protecting our environment,” he told a post-budget gathering aimed at sensitizing ordinary Ugandans about the latest tax issues.

However, the planned clampdown offers a glimmer of hope for sellers of new models whose main customer predominantly remains the government. By law government ministries, departments and agencies (MDAs) are not allowed to purchase used vehicles. The market for new vehicles in Uganda hovers at between 25 pc and 30 pc.

Kateshumbwa said URA wants to help limit pollution safeguard ensure the country’s environment is free from any kind of pollution, save foreign exchange and also provide a conducive setting for the development of motor vehicle assembly plants in Uganda.

A sales manager of new cars and pick-ups of a widely driven Japanese marque told 256BN on Thursday, “We expected a tighter ban of eight years. It is a toe in the door, but we have consistently told the government if they want serious investment in the automotive industry, there must be a fundamental policy change that makes such investment viable.

“Look at what is happening in Kenya and Rwanda. South Africa has the continent’s strongest car manufacturing base, because it does not allow imports of re-conditioned vehicles under any circumstances. It is matter of making brave choices,” he said.

However, according to the 2018 Deloitte Automotive Insights report (East African consumer perspective), price is the key factor influencing the purchasing decision of Ugandans. This is in line with the fact that most vehicles fall into the lowest price bracket (less than UGX17.5 million (below $5,000)’. New cars can cost 10 times and more depending on the model.

‘There are significant differences among various groups in terms of preferences. For men, status is the most important criterion, whereas women care little about this when buying a vehicle. Similarly, buyers of new vehicles are much more concerned about status compared to buyers of used vehicles. First-time owners seem to be far more price-sensitive compared to owners that have owned vehicles before,’ the report states in part.

Speaking recently, Marvin Ayebale, the secretary general of the second hand car importers  association said any proposal should be done in phases to mitigate the adverse effects these new regulations have on their businesses. He said many Ugandans cannot afford new cars because they are beyond their income bracket.

“We are not against the government proposal of banning the importation of second-hand cars ,but more time should be given to the dealers since some have made orders for the vehicles from Japan and other countries. If the government implements the proposal, car dealers will be affected,” he said.

Historically, Pakistani nationals play a leading role in Uganda’s used vehicle import market and operate some of the biggest bond facilities in and around central Kampala.

According to the Deloitte report, cash and savings were the major source of vehicle finance accounting for 80 pc of all purchases. The second most important source at about 13 pc was a bank loan, reflecting the lack of financial products for vehicles in the market. The dominance of cash as a financing channel was evident irrespective of price, sales channel, employment status, age, kind of vehicle or whether the owners were first-time or non-first-time buyers.