Ugandan public to be shown where their taxes go

September 22—The Uganda Revenue Authority (URA), one of the country’s most dreaded agencies, will be involved […] 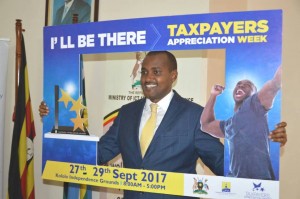 Tumwebaze said the event will offer government departments and agencies a chance to show the tax payer where their money is going.

September 22—The Uganda Revenue Authority (URA), one of the country’s most dreaded agencies, will be involved on a charm offensive next week which will include free Yellow Fever vaccination for those intending to travel abroad and other goodies.

During a joint news conference between URA and the other host of the next week’s events, the  Ministry of ICT and National Guidance, Vincent Seruma, the Assistant Commissioner Public and Corporate Affairs at URA , invited the general public to take advantage between September 27 and 29.

“Ministries, departments, and agencies will exhibit in a response to a persistent desire by the public to know how collected revenue is put to use. Senior government officials will daily provide press updates every two hours to discuss the ongoing projects and the progress to date. These will include health, education, agriculture, trade and energy,” Seruma said.

Normally Yellow fever vaccination can cost between UGX50,000 (about $14) and UGX100,000, so the organizers are at least assured someone will turn up the Kololo Independence Grounds on the outskirts of the city centre.

URA has also invited over 100 companies who excelled in paying their taxes during financial year 2016/2017. These have been allocated free exhibition space. Companies that have embraced the ‘Buy Uganda Build Uganda’ (BUBU) initiative will be allowed to showcase their goods as well.

Seruma said, “This is to encourage and appreciate them. It is also an opportunity to grow their businesses and mirror their repute to non-compliant members. In addition a total of 12 awards will be given out under three categories of excel-for the best/highest tax payers, vantage for best tax payers and the commissioners general’s for good partnership. I appeal to all Ugandans to come and enjoy these free services as well as receive information.”

Frank Tumwebaze, the ICT minister said, they are proud to partner with URA for the three day event because the obectives corresponds with the mandate of the Ministry.

“Our other mandate is to offer national guidance. National guidance is done thorough open communication and accountability. That is why we are going to partner with URA to help government agencies to showcase their services,” Tumwebaze said

He asked Ugandans to stop looking at taxpaying as a punishment, but as an opportunity to develop their economy.

Tumwebaze said beginning in October, government agencies and ministries will be holding accountability meetings to showcase and account for the money given to them.

He said arrangements had already been made with the Office of the Prime Minister to allow different government agencies hold conferences at OPM every month.

“Government agencies and ministries do a lot of work, but because they do not communicate with the public, their work is not appreciated and there is no impact, because the targeted audience is not informed. That is why we are going to be organizing monthly meeting with the public and the media and the heads of government agencies and ministries will be expected to publicly account for every coin that was given to them,” Tumwebaze said.