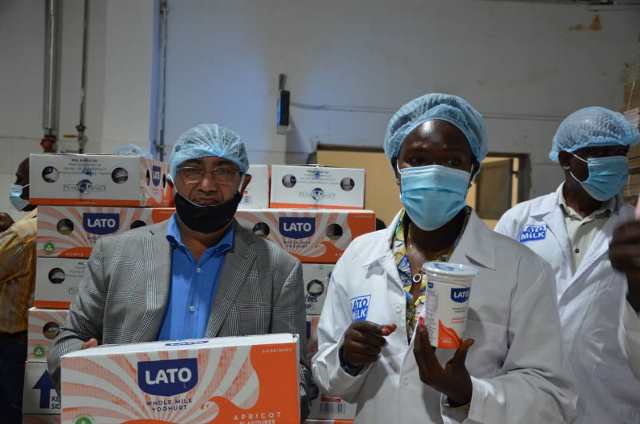 Investment and Privatisation Minister Evelyne Anite flagging off a new range of Lato yoghurt favours at the Pearl Dairy Farms factoru in Mbarara October 3. Next to her (holding carton) is Bhasker Kotech, Chairman Pearl Dairy Farms and Midland Group of Companies

Lato Milk producer Pearl Dairy Farms, has embarked on a product diversification and capacity growth plan that the company hopes will stimulate new demand and help it break into new markets in Africa and beyond.

The company launched five new flavours of yoghurt on October 3, as part of efforts to increase domestic consumption for milk through an expanded product proposition. Uganda produced 2.4 billion litres of milk during 2019 but less than 30pc of farm output was sold to processors.

After making inroads into Ethiopia, Malawi, Zambia and Japan, Pearl Dairy is now looking to new markets in Algeria, Angola and Nigeria for its powdered milk. Plans to increase the capacity of the drying plant at its Mbarara based factory to 30tons of milk powder daily are at an advanced stage. The company’s products have also been embraced by Middle-Eastern carrier Emirates and Qatar Airways as well as the Business lounge at Jomo Kenyatta International Airport, officials revealed. 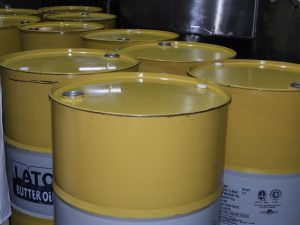 Speaking on the sidelines of the launch of four new flavours of yoghurt by Ms Evelyn Anite, the junior minister for finance in charge of Investment and Privatisation, Davendra Seth, the Managing Director explained that the expanded product range and increased production of milk powder will partly address the constraint of the low levels of processed milk which leaves farmers stranded with milk.

Coming on the back of a devastating market slump that saw farmgate prices crash to their lowest level in years, the product diversification plan forms part of a wider strategy by Pearl Diary to stabilize the milk value chain through increased domestic consumption of milk products and tapping into new markets as Africa opens up to internal trade among member states.

Loss of access to the Kenyan market and contraction of internal demand as a result of Covid-19 impacts saw the company’s milk purchases plunge to a daily average of 130,000 litres during the first 9 months of this year compared to 400,000 litres daily over the course of 2019.

Uganda has about two dozen milk processors but because of a limited cold chain in the country, the market for fresh milk is very small. Pearl Dairy specializes in long-life liquid milk with a 6 months shelf-life and powdered milk at 24 months.

“We are expanding the capacity of our drying plant so that we can produce more milk powder. We are expanding from 20 to 30 tonnes of milk powder per day and combined with our UHT line, our daily milk production will go to 50tons. That will drive our expansion into new markets and also translate into more stable incomes for farmers,” Seth said.

Group Chairman Mr. Bhasker Kotecha, wants the government to address the issues that have seen the company face barriers in the East African market.

“As we also look to expand our market to other countries, we ask government to work on the market access issues within the EAC region because that is where our biggest market is,” he said.

In addition to VAT at a rate of 16pc per litre, Kenyan introduced quotas for Ugandan milk the end of 2019. That move slashed 90pc off the volumes Pearl Dairy had been exporting to Kenya previously. 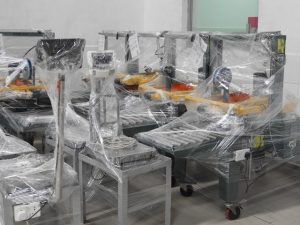 Mr Kotecha says limited access to the Kenyan market and, the Covid 19 Pandemic that saw Uganda go into a nationwide lockdown in March, forced the company to reduce the volumes of milk it was purchasing from farmers. The resulting market collapse dented farmer incomes and now many are moving away from milk production.

“In 2019, Pearl Dairy paid UGX136b to farmers, this year, we have only paid UGX32b as of September. This largely affects the farmers who have a lot of milk but have no where to sell it,” he explained.

As part of product diversification, the company is also processing milk into Butter Oil for which it has opened a market in the Japanese food industry. That is in addition to Ghee which is also gaining ground in the domestic and in the African markets that the company has been able to develop.

Ms Anite allayed fears over farmers migration from dairy to beef production, describing it as a positive revision of business models at the micro level that should result in a more balanced market for animal products in the short to mid-term.

“Some of our regional markets especially Kenya got issues last year but we are working hard to resolve those issues. As government, we shall continue supporting the investor through access to affordable credit, providing reliable and affordable electricity and access to local and regional markets,” she said.