Ugandan minister asks farmers to borrow a leaf from Kenya 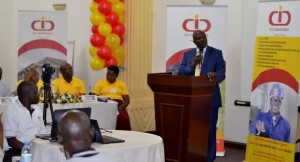 April 16, 2018—Frederick Gume, a state minister for agriculture, has asked Ugandan coffee farmers to intensify efforts to improve processing because their Kenyan counterparts continue earning premium prices due to the higher quality of their beans.

Kenya is regional leader in the Arabica variety of which Uganda only grows about 10pc of total annual output with  Robusta dominating exports. Robusta is the main ingredient for all instant coffee, but in the lucrative United States market,  the Arabica bean is the most favoured and usually fetches higher prices.

Ngobi said he had received reports indicating that while a 50 kilogramme bag of coffee in Kenya was at $700, in Uganda, it was only being sold at $150 which he said is discouraging to the farmers. “Since we are already working as a region, heads of cooperatives in Uganda should consult those in Kenya and other countries on how they are keeping the prices of the farmers products relatively high,” Ngobi said.

Figures from the Nairobi Coffee Exchange show that at one point during February, a 50 bag kilo of AA Grade coffee was being sold at $679, a reflection of the high demand from international roasting houses who value the Kenyan beans’ blending qualities.

Ngobi was speaking at the annual general meeting of the Cooperative Insurance Corporation Uganda that took in Kampala recently. CIC is a joint venture between CIC Kenya and the Uganda Cooperative Movement in Uganda with the main aim of offering insurance to cooperators.

The Minister said there is a need to harmonize produce prices in all East African Community countries so that they can bargain and sell as one big bloc instead of single countries. However according to experts, Kenyan coffee beans have a  much brighter sweeter taste with complex tones of fruit and berry that few Ugandan beans can match apart from the speciality varieties grown in the highlands.

The Corporation now has over 200 cooperative groups from across Uganda who own 49pc of the company. Speaking at the same function , the CIC Group Chairman Japheth Magomere said the only way Ugandan farmers would ensure high prices for their products is ensuring high quality and eliminating the middle men who are taking most of the profits.

“We are one as one big body, under the East African Farmers Federation to train and help farmers on how to improve the quality of their products so that they are able to deal directly with the consumer without selling to a middle man,” Magomere said.

Zipporah Mungai, the CIC Uganda managing director asked more cooperatives to join the insurance group so that they can work together and limit the high risks involved with the kind of activities cooperatives do.” We offer insurance against  fire, theft and burglary, travel insurance, motor comprehensive, motor commercial and many more. And the most important part is that these cooperatives will have shares and decide on how the profits made can be invested,” Mungai said.

According to the CEO Uganda Cooperative Alliance, Ivan Asiimwe  the insurance company is a big achievement for the Uganda cooperative movement as they are benefiting twice from the insurance and the profits from the shareholdings.

“This is our company in partnership with our brothers from Kenya. Instead of getting insurance from other insurance companies who we have no say or control over, it is good that now we have ours that will help in pushing the cooperative agenda forward,”Asiimwe said