March 14–A Ugandan venture, Project Pedal Tap is among the three winners of the first Africa […] 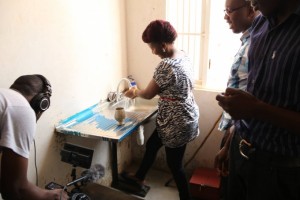 A pedal tap is not a totally new idea, but the three Ugandans have added  improvements.

March 14–A Ugandan venture, Project Pedal Tap is among the three winners of the first Africa Innovation Challenge organized by Johnson & Johnson, the US multinational that long ago expanded from baby powder into pharmaceuticals, diagnostics, surgical and biotechnology products.

“This was an extremely difficult competition to judge as there were many terrific ideas,” said Josh Ghaim, Chief Technology Officer, Johnson & Johnson Consumer Inc. Other winners are Project Agateka (Burundi) and Project Kernel Fresh (Liberia).

Each of the recipients will receive funding up to $100,000, as well as mentorship from scientists, engineers, and operations members from the Johnson & Johnson Consumer Research & Development organization and other areas of the company. Last year, company sales worldwide reached $71.9 billion, an increase of 2.6% compared to 2015.

The innovators behind Project Pedal Tap, Grace Nakibaala, Molly Mbaziira Nannyonjo, and Isah Ssevume all Makerere University students, wanted to prevent disease transmission, and a reduction of water use. So they developed a hands-free solution for hand water taps in Uganda. Project Pedal Tap is already a recipient of $5000 from the Big Ideas competition, which was organized by the Rudd Family Foundation last year.

Ghaim said, “The three winning projects demonstrated a strong benefit to local communities and the ability to empower young women, and they also have the potential to deliver ongoing economic support. We look forward to working with these entrepreneurs over the course of the next year to help them build sustainable operations.”

Project Pedal Tap is not a totally new, but the trio have made some improvements.  They hope to create manufacturing capabilities, using mostly recycled materials, which will lead to an ongoing business. Nearly 500 applicants submitted their ideas.

Project Agateka provides a sustainable solution to support girls who are unable to afford menstrual pads and underwear which is an important need for young women. Project Kernel Fresh sources natural palm kernels from smallholder women farmers, increasing their income. The entrepreneur then cold presses the palm kernel oil to be used in organic cosmetics.