October 30—Rosebud and Premier Roses, two of Uganda’s largest exporters of cut flowers, have been granted […] 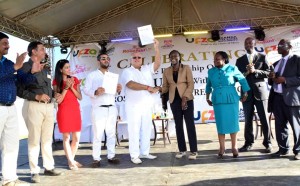 October 30—Rosebud and Premier Roses, two of Uganda’s largest exporters of cut flowers, have been granted Free Zone licenses to help them compete more favourably with rivals in Ethiopia and Kenya.

The status, recently being popularized by the Uganda Free Zone Authority (UFZA), relieves the companies from paying some taxes as long as their products are primarily for the export market.

Rajiv Ruparelia, the Managing Director at Rosebud, said the company has been facing challenges including expensive electricity and strong competition from Kenya and Ethiopia who are have relatively lower overhead costs.

He said the Free Zone status will go a long way in helping their two companies to go forward. “Uganda being a landlocked country, our only means of exporting these flowers has been air transport which is costly. Now we are going to concentrate on expanding flower production,” Ruparelia told Evelyn Anite, a junior minister in the finance ministry last week during an official handover ceremony at Rosebud. He promised that a further expansion in production will mean a fourfold increase in the number of new jobs.

Frederick Kiwanika, the UFZA chairman said the granting of the licenses is in line with the Authority’ s mandate to create jobs and promote the economy through promoting export trade. “The authority was created in 2014 mainly to promote export trade and create employment opportunities for Ugandans. Ruparelia Group of Companies has gone a long way to create jobs so they deserve the Free Zone license,” he said.

He however cautioned the two companies to follow the regulations and procedures of the Authority and follow the rules that regulate these zones.

The UFZA now has a policy in which some industries can be designated as areas in which taxation is at a minimum or not at all in order to encourage more economic activity. Anite, who is state minister for investment and privatisation, asked Ugandans and especially the media, to support investors both local and foreign instead of highlighting their financial problems.

Both flower companies are subsidiaries of the Ruparelia Group, chaired by Sudhir Ruparelia, who at one time also owned Crane Bank, which Bank of Uganda took over end of last year for insolvency before selling most of its assets to dfcu Bank.

Anite said investors should be treated as friends and not enemies, because they compliment government in development especially in employment creation. “When you write bad things in the media about Sudhir or any other investor, know that you are indirectly attacking thousands of Ugandans that work at his company as well as the economy. When one investment fails, Uganda loses millions. The person who deserves your support is that one that is providing a source of food and income to a common Ugandan not politicians,” Anite said.

Sudhir Ruparelia thanked the government for continuing to create a conducive environment for investment. He also thanked his employees for their hard work and making the two flower exporting companies a success.