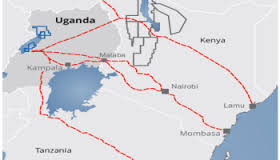 KAMPALA, MARCH 10- Danish consulting engineering firm Ramboll has commenced aerial surveys for the route the white-oil products pipeline will follow from Hoima to Kampala even as the route to market for crude exports remains a matter of contention between Kenya and Tanzania.

The Ugandan ministry of energy confirms that the surveys which kicked off on March7 will run for 3 months with a report expected at the end of June.

Officials say while the general alignment of the 230km pipeline that will terminate in Buloba just outside Kampala is known, the current phase seeks to establish social and environmental impacts and the precise number of people that will be affected by the project.

The development is another baby-step that reflects the continuing desire of Uganda’s authorities to bring oil, first discovered in 2006, to commercial development. The pipeline will be paired to a 30,000 barrels a day refinery whose development was awarded to Russian form RT Global Resources in February 2015.

The refinery whose capacity is expected to grow to a peak rate of 120,000 barrels of refined products per day is supposed to come online in 2018 but slow progress in resolving an exit route for crude exports and issuance of production licenses means the upstream companies are yet to commit to a definite date for pumping crude.

Uganda has signed MoU for an export pipeline with both Tanzania and Kenya leading to considerable uncertainties within the industry.

Kenya is angling for a 1500km routing for a pipeline that would terminate in Lamu while Tanzania is offering a 1210km southern route to Tanga port on the Indian Ocean. French oil major Total, backs the latter routing.