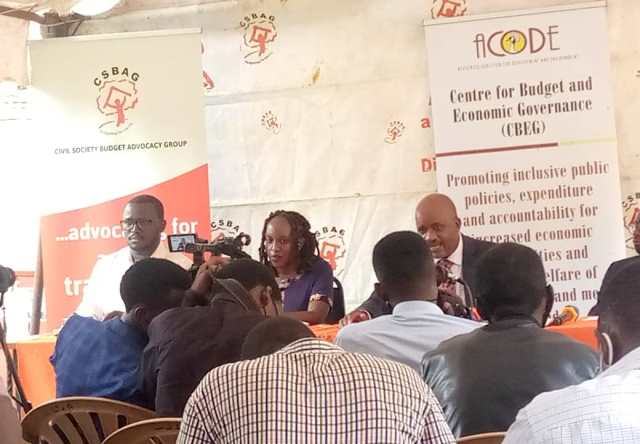 Proposed amendments to the Public Finance Management Act could expose Uganda’s oil revenues to risk of loss, Civil society budget watchdog CSBAG and the Civil Society Coalition on Oil CSCO, have warned. The executive has tabled amendments that would allow the Uganda National oil Company UNOC, to spend proceeds from oil sales rather than deposit the same into the petroleum fund for appropriation by parliament.

The amendments also propose to exclude crude oil from the current definition of petroleum revenue. The current law classifies petroleum revenue as money earned from any activity related to the oil and gas sector including signature bonuses and licence fees. Oil to be transported through the export pipeline will not be considered as oil revenue.

The Public Finance Management Amendment Bill 2021, that was presented to parliament on September 27, proposes to amend section 56 of the Public Management Act 2015, which requires all proceeds from petroleum sales by the government of Uganda to be deposited into the Petroleum Fund. Drawings would then be appropriated by parliament to ensure any expenditure is for productive rather than consumptive purposes.

The executive argues that the current law constrains UNOC from fulfilling its financial obligations to partners under the Host Government Agreement and the Tariff and Transportation Agreement. The amendment proposes that UNOC spend the money at source and only deposit any balances into the Petroleum Fund.

The proposals come as Uganda races to pump oil discovered 15 years ago, out of the ground starting 2025.

Speaking to media November 8, the non-profits said the proposal would in effect shield UNOC from the appropriation process and the authority of parliament. Such a veil over UNOC, could open room for abuse of oil revenues, they argue.

“We find this proposal irrational on the grounds that Uganda’s annual budget process is sufficient to accommodate any emerging financial needs of any government agency,” Mukunda said citing the Uganda Revenue Authority Act 1991 which allows the tax collector to spend at source on authorisation by the finance minister, an amount not exceeding what has been approved by parliament.

Clause 5b provides that UNOC can deposit any balances into the Petroleum Fund and submit a copy of the record to the minister, secretary to the treasury, the accountant general and the auditor general. The cso’s fault the framers of the bill for using the term MAY instead of SHALL which would make those filings obligatory.

“This will constrain the role of parliament in dealing with residual moneys if any,” Mukunda said adding that the amendment will weaken the existing accountability mechanisms and undermine the oversight role and power of parliament.

Clause 3 of the bill proposes to allow UNOC to make investments from balances in the petroleum fund without parliamentary approval. Instead, necessary authorisations would be sought from the UNOC board and the cabinet.

To preserve parliamentary oversight and facilitate UNOC’s operations, the cso’s propose adoption of the Uganda Revenue Authority Act model, make provisions for UNOC’s recurrent expenditure under section 59 of the Public Financial Management Act 2015 and to develop an MoU between the Bank of Uganda, UNOC and the Finance ministry on access to funds on call based on the oil marketers approved investment workplans and budget.

The non-profits further warn that allowing the proposed amendments to pass is fraught with multiple risks that could lead to loss of revenue and would defeat the purpose of the Public Finance Reform Strategy 2018-23, which requires all government ministries, departments and agencies to deposit it into the Consolidated Fund.

“Oil should be the blessing we have been waiting for and not the curse that awaits us. The proposal that oil which is being transported for sale should not form part of our definition of oil revenue and that UNOC should have wide latitude to spend oil proceeds is worrying. It also runs counter to known management principles,” said Patrick Katabazi, the Executive Director Centre for Budget and Tax Policy.

Peninah Mbabazi, a Programme Officer at SEATINI-Uganda says, “there are a lot of loopholes in these proposals which instead of creating fiscal discipline actually undermine public control over oil revenues.”

“We appreciate what the govt is trying to achieve by giving UNOC flexibility to finance its operations but these proposals are way overboard,” said Joseph Mukasa Ngubwagye a Senior Research Fellow at Advocates Coalition for Development and Environment ACODE.