April 25, 2016 – Uganda’s financial industry is upbeat about prospects for financial inclusion following the […] 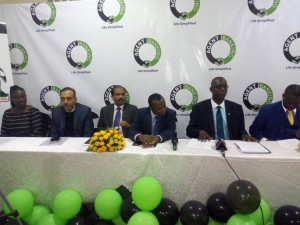 April 25, 2016 – Uganda’s financial industry is upbeat about prospects for financial inclusion following the launch earlier today of a shared platform for agency banking.

Spearheaded by the Uganda Bankers Association, the Agent Bank Company so far has seven banks hooked up with another 14 at different stages of onboarding.

Presiding over the launch, finance minister Matia Kasaija said the event marked “the beginning of a beautiful journey towards achieving financial inclusion.”

“The goals of the shared agent platform speak to pillar number three of the National Financial Inclusion Strategy of building digital financial infrastructure to reduce access barriers to financial services and to drive the uptake of financial products,” he added.

Speaking earlier, Mr. Wilbrod Owor, the chief executive of the Uganda Bankers Association said the system which takes a range of banking services out of the traditional brick and mortar branches was expected to propel the industry faster towards meeting its goal of bringing formal financial services to another 11 million Ugandans by 2022.

Owor revealed that Uganda’s 24 banks held 7.4 million accounts and only 6 million of these were active. This number is served out of about 600 brick and mortar branches and a network of 850 automated teller machines.

That compares with 41 million accounts and 54,000 Bank Agents managed by the financial industry in Kenya.

“In Uganda, about 11 million people are financially excluded from the non-banking and formal banking sector,” Owor said.

The new platform, he said, would help bring the non-banked faster into the loop. The service which is expected to piggyback on existing merchants and mobile money agents in last mile locations, will be available to all member banks with a single agent able to serve customers from all member banks. Agents will be able to facilitate deposits and withdrawals and initiate account opening.

UBA has set itself a target of recruiting 14,000 agents over the next three years but the telecom industry has given the association a leg-up by making 11,000 of their most credible mobile money agents, available to member banks.

Ms Josephine Musiitwa, the chief executive of the Financial Sector Deepening Project in Uganda – FSDU- said that while 33pc of adults in Uganda were banked, the goal now was to increase this to 80pc by 2022. She said rolling out the shared platform would address two of the key barriers preventing more Ugandans from accessing formal financial services.

“This system addresses the key barriers to financial inclusion – lack of physical access to service points and, the cost of financial services. A shared platform reduces the investment cost individual financial institutions would have faced while the extensive next-door network will bring services to within a five miles radius,” she said explain that they hope to reduce further to less than 1 kilometre in the future,” she said.

Mr.Varghese Tambi, the MD of Diamond Trust Bank allayed fears of possible job losses saying while the industry currently has about 12000 workers on the payroll and the banks would complement each other on the platform, workers would still be needed to train and support agents as well as continue to offer those services such as loan applications, that can only be accessed at the branches.