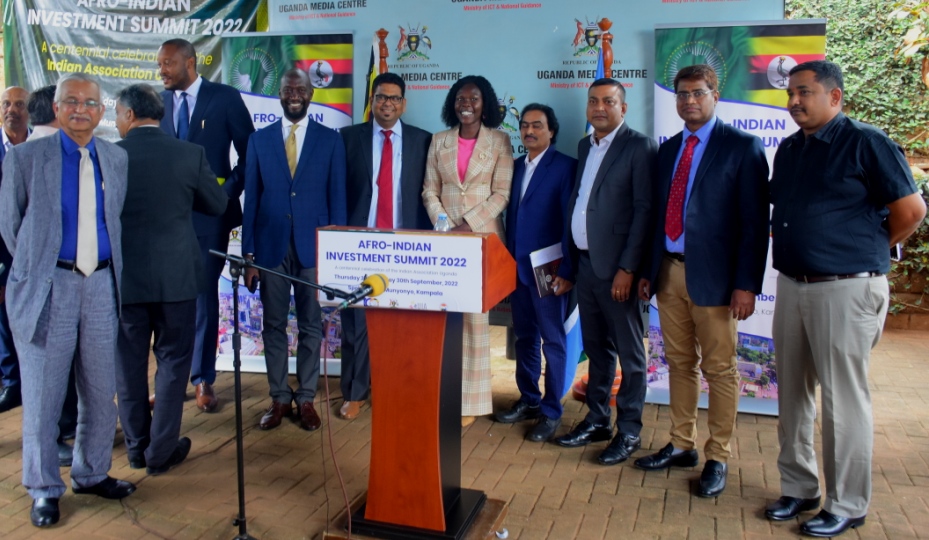 Anite is flanked by various officials from the IAU and IBF, together others from the Uganda Investment Authority after announcement of the forthcoming summit scheduled for the end of September in Kampala.

President Yoweri Museveni is scheduled to officially open the inaugural Afro-Indian Investment Summit to take place between September 29 and 30 in Kampala, under the theme, ‘Investment in Uganda for inclusive Prosperity’. The summit is one of other events this year, to celebrate achievements of the Indian Association Uganda (IAU) which was founded 100 years ago.

Last year, when hosting the Indian community to celebrate Diwali at State House Entebbe, President Museveni expressed appreciation for their contribution towards the socio- economic development of Uganda and asked them to encourage other Indian investors to follow suit.

During a news conference held at the Media Centre in Kampala recently, Evelyn Anite, State Minister of Finance for Investment and Privatization said, “Uganda and India have enjoyed warm and cordial bilateral relations since independence in 1962, but long before then Indians were trading and doing business in Uganda.”

She said, “India remains a strong and reliable partner in Uganda’s quest for industrial development and overall economic transformation. It is estimated that Indians/Persons of Indian Origin have invested more than USD 1 billion in the country during the last two decades. To further balance out trade which is tilted in favour of India, the Government of Uganda is actively engaging India through its vibrant private sector to consider expanding its importation of products from Uganda.”

She said, “The Uganda Investment Authority is therefore keen to attract more Indian companies and businesses to invest in different areas of the economy beyond their existing fields of operation, namely: agro-processing, infrastructure development, real estate and health. Likewise, India is happy to offer a ready market for many Ugandan products including coffee, powdered milk, cocoa, handicrafts, and processed fruits, among others.”

The forthcoming business discussions are being jointly organised by the Ministry of Finance, Planning and Economic Development, the Uganda Investment Authority and the Indian Business Forum, which is a branch of the IAU.

More than 1000 people, including those from the Indian Diaspora across the world, are expected to attend the event at Speke Resort Munyonyo.  According to the UIA, India is the second source country for investments in Uganda. Between 2015 and 2020, UIA licensed 228 Indian investment projects valued at $464.5 million accumulating in nearly 20,000 jobs. Major areas of interest were manufacturing, agriculture, construction, healthcare, real estate and education.

Mohan Rao, the IAU chairman said, “Apart from the unfortunate interlude in 1972, following Idi Amin’s expulsion order, for decades Ugandan Indians have invested heavily in a wide range of business activities that have contributed to the country’s economic growth.”

He said, “This event will not only showcase Uganda’s investment opportunities, but also highlight the successes of Ugandan Indians doing business here as well as also provide a platform for networking. Participants will also benefit from meeting various government officials to discuss the bottlenecks impeding investment in Uganda.”

He said, “According to UNCTAD of all the East African Community member countries, Uganda received the biggest flows of foreign direct investment (FDI) topping one billion dollars in 2021. We want to help maintain this momentum by inviting Indian potential investors from the Diaspora and those already here to explore new opportunities available for them as we aim for greater inclusive prosperity.”

The summit programme includes presentations and panel discussions that are expected to provide insights into the key investment sectors that the government sees as priority under the National Development Plan (III) and realization of Uganda Vision 2040. These include agribusiness and agriculture value-addition, infrastructure, energy, pharmaceuticals, tourism, mineral development and ICT.

The IBF Secretary General, Y. Mohan Reddy said the IBF has been instrumental in attracting both Indian investors to Uganda and enhancing the growth of Ugandan Indian businesses in line with government policies, such as Buy Uganda, Build Uganda.

“About five years ago, IBF hosted several leading Indian investors, under the auspices of the Confederation of Indian Industry, who eventually went on to start successful projects here. We hope this summit will raise the profile of Uganda’s many business opportunities, especially in the eyes of Indians in the Diaspora who are looking for new destinations where they can get good returns on their investments,” he said.

Notable participants will include representatives from leading Indian-owned enterprises in Uganda, such as the Madhvani Group, Mukwano Group, Mehta Group, Roofings Group, Ruparelia Group and others. According to the Uganda Revenue Authority, Ugandan Indians contribute 60% of Uganda’s total annual direct tax returns yet they make up just one percent of the total population.

The summit will also provide a platform for potential investors to interact closely with key government ministers and senior officials in exploring investment options during the scheduled break-out sessions.

Top officials from the URA, UIA, the Uganda Registration Services Bureau and leading services sector companies such as UMEME, MTN Group, Airtel and National Water and Sewerage Corporation will also be in attendance.