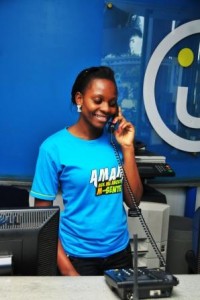 March 2–Uganda Telecom is looking for a white knight as the heavily indebted former state utility now grapples with an avalanche of government scrutiny after the Libyan majority shareholders relinquished ownership and fled the scene.

A figure of nearly $50 million is being thrown about as ideal to begin turning around Uganda’s biggest fixed line network. However, the government itself has already announced a 30% cut across the board for most of its ministries and offered no hints of any bail out.

Of recent, the UTL management style has not inspired much confidence among national legislators who accused it of managing the company into the ground.

But the UTL board Chairman, Stephen Kaboyo, has welcomed the government move to step in.“This will open up opportunities to accelerate the turnaround strategy that will put back Uganda Telecom in the market,” Kaboyo said.

He told a news conference that the Libyans through a holding company, UCOM,  no longer have any interest in funding the company.

UTL was incorporated in 1998 as a Public Limited Liability Company before the Libyans moved in. However the combination of UN sanctions and the overthrow of Muammar Gaddafi in subsequent years put paid to any  hope of long term investment from the UTL major shareholders.

Kaboyo said, “It’s unfortunate that UCOM decided to pull out at the time when a strategy that would transform the company was pending approval by government.”

He said the takeover by the government could provide the much needed window that will help revamp the operations of the company and propel it to the same status as its competitors in the market but this will need about $48 million to do so.

“A telecom company requires revamping of the networks and adopting new technologies as often as need be and you need to invest heavily to achieve this, but this wasn’t the case with UTL.  The telecom still has 2G and 3G networks and because of this, the company’s subscriber base started dropping,” Kaboyo said.

Mark Shoebridge the UTL Managing Director said the business hasn’t received the big bang investment to effect the turnaround of the company however the telecom has made great headway and improved its business performance by 53 % in 2016, a position the company had not enjoyed in many years. He said going forward, the telecom will focus on working with creditors to make sure that it reduces its debt burden and focuses on business growth.