Uganda tax collector told to live up to its taller profile

January 21, 2019—Over the weekend, President Yoweri Museveni officially opened the new 22-storey headquarters of the […]

January 21, 2019—Over the weekend, President Yoweri Museveni officially opened the new 22-storey headquarters of the Uganda Revenue Authority (URA) which cost UGX139 billion ($37 million) and is the tallest building in Uganda to date. 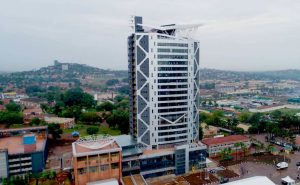 The 22-storey building is situated on the outskirts of central Kampala and URA promises better service delivery.

The building which is situated at Nakawa, on the outskirts of the city centre, was fully paid for from government resources. Museveni told URA top management and staff to use the facility to improve service delivery and collect more taxes to quicken economic development in Uganda.

This financial year ending in June, URA is expected to collect nearly UGX16 trillion (nearly $4 billion). The government is being pressured by multilateral lenders to raise the tax-to-GDP ratio from the current relatively lowly 14 pc to 16 pc by 2020.

According to the World Bank, informality, tax exemptions, and inefficiencies in revenue collection deny the country up to 40 pc of revenue.

The government continues to be generous in allocating resources for improving URA effectiveness, but the World Bank says only a small percentage of Uganda’s citizens actually pay taxes. In addition, about 80 pc of businesses are informal and transact in cash, making it difficult to track and assess them and this is one of the reasons URA has gone for voluntary compliance.

Seyani Brothers were the lead contractors on the project that will save URA an estimated $3 million in monthly rent and bring together several services in one place to ease customer convenience. 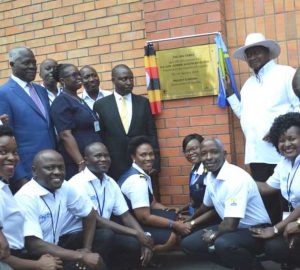 Museveni cautioned URA staff on corruption, “As you know, the government will show no mercy to any government official who is crippling government services through corruption,” he said.

Doris Akol, the URA Commissioner General said, “With up to 1700 staff, the maximum sitting capacity that the tower can accommodate, we hope to have all services in one area which we hope will improve our operations.”