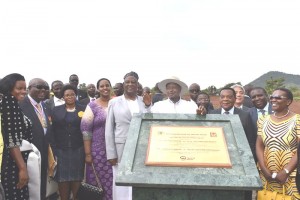 President Museveni (with hat) said he took a deliberate decision several years ago, to have Ugandans under specialised training in the oil sector.

Uganda has an estimated two billion barrels of recoverable crude in the western region of the country. “In 1925, the colonial government began to look for oil, but there were no results. In 1956, looking for oil was continued but still no results. But in 1986, they sent me a Ghanaian economist who they said was an oil specialist, but I discarded him because he was just an economist,” Museveni said.

The President said it was his deliberate decision to train scientists for three years to specialise in the oil sector, one of whom was Kabagambe Kaliisa, now a Senior Presidential Advisor on Gas and Oil and formerly the permanent secretary in the energy ministry.

The ceremony took place in Kabaale Parish, Buseruka Sub-County in Bunyoro Sub-Region where the first pumping station to transport crude oil to Tanga port is to be constructed. The cultural leader, Omukama Solomon Gafabusa Iguru of Bunyoro Kitara, also attended the ceremony.

President Museveni thanked the Tanzanian government for giving Uganda concessions to pave way for the 1440 kilometre pipeline to use the Tanga route and also for allowing Uganda to gain a right-of-way without paying any compensation. He advised Ugandans to tap into the available opportunities that come with the oil pipeline project in order to be employed. French company, Total, is the major financial backer for the project.

On behalf of Magufuli, Mahiga hailed Museveni for being a true Pan-Africanist, a humanitarian and a strong leader who has done everything to make the East African community dream come true. “The great inheritance of the Rift Valley is still hiding very many secrets. It could be thermal energy or spring water, you never know,” he said.

Energy and minerals development minister, Eng. Irene Muloni, thanked Tanzania for the strong partnership with Uganda to commence a great developmental project. She said to date, 98% of the Ugandans who had originally settled in the areas where the pipeline would pass had already been compensated and some had been resettled.

She said the nine districts in the Albertine region – Kakumiro, Kyankwanzi, Lwengo, Kyankwanzi, Gomba, Rakai, Bulisa, Hoima and Kyotera – had already started benefiting from the new roads under construction. She also reported that the oil refinery to be built in Hoima will have a capacity of 60,000 barrels per day.

Tanzania’s Energy and Minerals Minister, Dr Medard Kalemani saluted Museveni for laying the foundation for the oil pipeline and his exceptional commitment towards the project. He thanked Museveni for providing specialists to assist in exploring for oil deposits in Lake Tanganyika and Lake Eyasi.

He said Tanzania is planning to extend its power grid and will in the process supply electricity to six neighbouring villages in Uganda.