October 18—Rebecca Kadaga, the Uganda Speaker of Parliament took the chance to invite Russian investors to […] 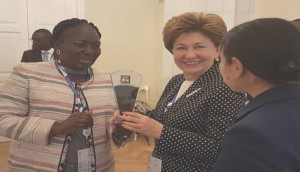 Kadaga does some networking during her visit to Russia early this week.

“We are confronted with a high level of unemployment. I am seeking your support for opportunities to increase manufacturing so that more opportunities are created for our youth,” Kadaga said.

She was in talks with Galina Karelova, the Deputy Speaker of the Russian Federation Council, on the side-lines at the meetings.

Kadaga said the future of Uganda and Africa are in the areas of science, research and innovation and appealed to the hosts to provide assistance in the same fields. She asked for more scholarships for Ugandan students on top of the 25 already requested by Uganda’s Embassy in Moscow.

“I am delighted by the assistance already promised. More scholarships in science and innovations would be helpful in building the capacity of our youth,” Kadaga said.

Generally, Russia is not a notable major investor in Africa, but still ranks high in matters of military equipment sales. EXIAR, the Russian Agency for Export Credit and Investment Insurance, is not as active in Africa as similar agencies found in the northern hemisphere.

The Federation Council of Russia is one of the two Chambers, together with the Duma, that make up the Federal Assembly or Parliament of Russia.

Kadaga also invited the Russian hosts to visit Uganda for religious tourism especially the Uganda Martyrs Shrine in Namugongo and to see the rare birds and wildlife in the country’s national parks.

She said despite the lack of direct flights between Uganda and Russia, the countries are not so far apart and can easily be served by international airlines.

Kadaga also welcomed collaboration on issues intended to improve the condition of women and children, areas her host is involved in.

The Deputy Speaker, Galina Karelova, said that Russia valued its relationship with Uganda and had only recently celebrated 55 years of diplomatic relations between the two countries.

She was also grateful for Uganda’s support to her country’s positions at international forums. “I believe that there is untapped potential in our relationship. I hope our relationship will be more intensive and dynamic after the IPU Assembly,” said Karelova.

She invited Kadaga and a Ugandan delegation to attend the upcoming Second Eurasian Women’s Forum.