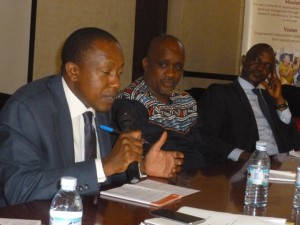 Kenneth Mugambe the Director of Budget at the Ministry of Finance, Julius Mukunda CSBAG’s coordinator and Ramadhan Goobi an Economics lecturer at Makerere University Business School during the Pre budget dialogue

Kampala January 24-Civil Society organisations have blown the whistle over Uganda’s spiking debt burden warning it could send the economy into a spin.

Speaking on the sidelines of the CSO FY2017/18 Pre-Budget dialogue that interrogated the ability of the 30 trillion budget to address service delivery challenges while improving, speakers also doubted the spending plan would bring the desired benefits.

“Although there is more money in the budget we are also seeing an increase in the country’s total debt stock which has increased from 33.133 trillion from FY 2014/15 to 46.2 trillion for the financial year 2017/18. This suggests that the more the budget increases, the more indebted the country will become since most of it is financed through borrowing,” Imelda Namaga a Senior Programs Director at Uganda Debt Network said.

The recent Auditor General Reports also highlight consistent low debt absorption and non-performance of loans for the last five years which culminates into the payment of commitment charges/fees and reflects ineffective implementation of project programs.

The country will pay 2.3 trillion shillings in interest due this financial year, far higher than allocations to the social sector. This reflects an anomally that suggests that debt servicing is the focus on the budget.

Julius Mukunda the coordinator at CSBAG says that government needs to establish a fully functional appraisal and evaluation department to improve project designs to enable the avoidance of debt related costs and delays during implementation as a result of poor feasibility studies and project designs as it will also enhance the absorption capacity to ensure full utilisation of borrowed resources.

Although Kenneth Mugambe the Director of Budget in the Ministry of Finance and Economic Planning emphasised that that government does not borrow to consume but to improve infrastructure  the CSOs argue that more borrowing will simply throw the country into a debt trap.