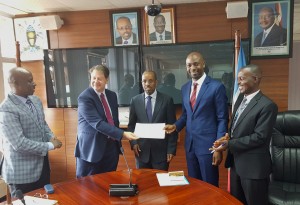 Muhakanizi (centre) witnesses the MoU between TMEA represented by Matsaert (second left) and Jabo, the UFZA boss at the finance headquarters in Kampala.

Free Zones are customs-controlled areas where goods introduced into this designated space are generally regarded, (so far as import duties are concerned) as being outside the Customs Territory. Notable examples include Export Processing Zones or Free Port Zones.

The UFZA was set up to establish, develop, manage, market, maintain, supervise and control these zones in Uganda under the Free Zones Act of 2014.

The MoU will guide the implementation of the partnership and establishment of a Investment, Trade and Logistics Hub in Jinja to promote collaboration between the two organizations.

The Logistics Hub in Jinja is expected to boost economic growth, create employment and contribute towards sustainable and inclusive prosperity of the region by promoting the reduction of trade barriers and ensuring improved business competitiveness.

The MOU was signed by Richard Jabo, the UFZA Executive Director and  Frank Matsaert, the Chief Executive Officer of TMEA based in Nairobi. The event was witnessed by Keith Muhakanizi, the Permanent Secretary and Secretary to the Treasury at the Ministry of Finance head offices in Kampala.

TMEA is an aid-for-trade, non-profit, non-governmental organisation that was established with the aim of growing prosperity in East Africa through increased trade, funded by a range of development Agencies.

The partnership will be extended to a number of areas such as; development of an online portal to enable UFZA submit electronic information on the licensed Free Zones Developers and Operators, supporting the Authority’s Research agenda and supporting the establishment  of Data Management Information System.