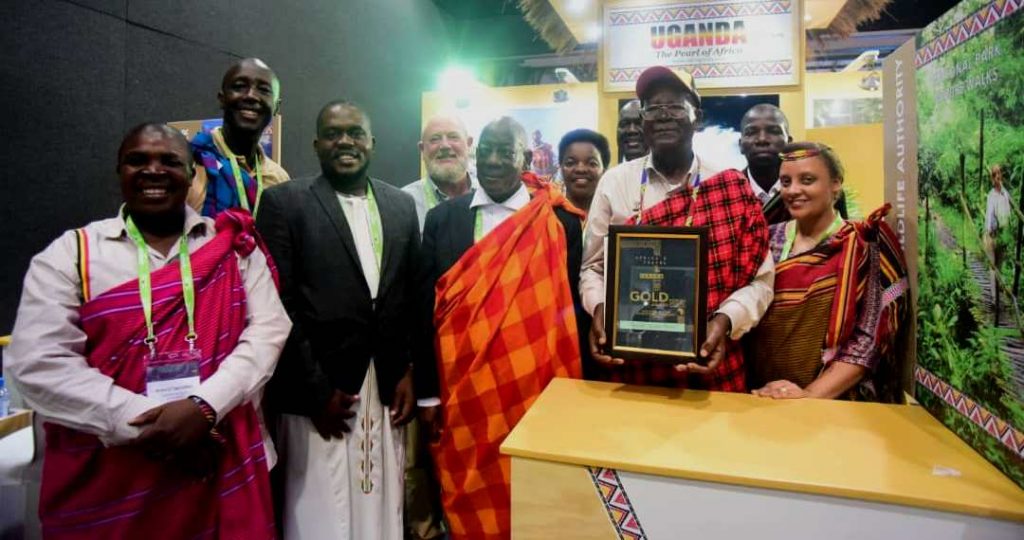 A delegation comprising of 13 private tour operators and government agencies led by officials from UTB represented Uganda in Durban.

May 8—For the third time in four years, Uganda won gold in the South African Development […]

May 8—For the third time in four years, Uganda won gold in the South African Development Community and Africa category at the recent Indaba Tourism Fair.

Uganda was also awarded the same medal in 2015 and 2016 at Africa’s premier travel exhibition. Lilly Ajarova, the Uganda Tourism Board (UTB) Chief Executive Officer said, “We put a lot of work into our exhibition stall to ensure that it captures all elements of tourism in our country; that is wildlife and cultural heritage, whilst also ensuring that the spacing would enable close interaction with our visitors.”

Africa Travels Indaba is a tourism expo hosted by South African Tourism and attended by both tourism buyers and sellers from all over the world at the International Convention Center in Durban, South Africa. However, Uganda has emerged among the best exhibitors at other tourism expos such as ITB Berlin, the Bird Fair in London, UK in 2017 and the Kenya Tourism expo, among others.

Tourism minister, Prof. Ephraim Kamuntu, said Uganda had shown her peers that she is a force to be reckoned with. “This award is an illustration of what Uganda is like. We showcased our culture, but also our uniqueness and the organizers were amazed by what Uganda has to offer. I am happy that we are being recognized for our uniqueness,” he said.

A delegation comprising 13 private tour operators and government agencies led by officials from UTB represented Uganda in the annual showcase.

Ajarova said “We are elated to have won gold as the best exhibitor at this year’s Indaba fair. This is true testament to Uganda’s immense natural endowment and also shows that the world is appreciating our tourism potential. This therefore calls for concerted efforts to market our country to the world because we offer the most complete tourist experience.”