May 31, 2018—Every time Ugandans choose to gossip on various social media platforms, or make a […]

May 31, 2018—Every time Ugandans choose to gossip on various social media platforms, or make a mobile money transaction, the government will be earning more money after Parliament passed the Excise Duty (Amendment) Bill, 2018 on Wednesday afternoon. 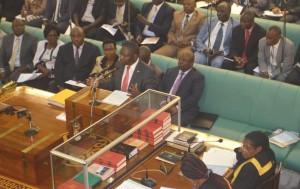 Bahati at the dispatch box in parliament on Wednesday, defended the government’s  latest measures to increase tax revenues.

Effective July this year, whenever a subscriber uses platforms such as WhatsApp, Twitter or Facebook, they will be charged UGX200 (less than one US cents) per day. There are about 25 million mobile phone subscribers in Uganda with three quarters of them having mobile money accounts.

Internet penetration in Uganda is just under 40%, but no specific figures are available on smart phone ownership. On the other hand, a sharp rise of data bundles sales indicates an increasing demand for these phones as prices have also fallen with the availability of used handsets. Like in many other countries around the world, in Uganda social media is now an essential.

The Finance Committee supported the proposal stating that it is unfair and inequitable to compare subscribers who buy airtime just to make voice calls with those who have the luxury to go onto social media platforms or browse the internet besides making calls.

A 1% levy has been slapped on the value of Mobile Money transactions from which the government hopes to raise UGX115 billion next financial year. During 2017, total mobile money transactions topped UGX54 trillion (about $14.5 billion).

The Committee accepted the finance ministry’s reasoning that use of mobile money is an efficiency gain and should be taxed, adding that money has migrated from the traditional payment systems like banks to the digital platforms.

David Bahati, a state minister in the finance ministry, brushed away critics of the amendment Bill, saying that tax is a contribution, not a punishment and that the appetite for those demanding goods and services must be backed by measures to support them.

However, the Committee rejected the proposal to impose  more excise duty on soft drinks ,arguing that the current tax is already the highest in the region and further taxation is bound to encourage smuggling of soft drinks from the neighboring countries.