November 14—The Albertine Graben Refinery con­sortium, which is negotiating with the Uganda government over the construction […]

November 14—The Albertine Graben Refinery con­sortium, which is negotiating with the Uganda government over the construction of new  oil refinery, has posted a $2 million commitment bond as a show of good faith to sign the Project Framework Agreement (PFA) for the proposed $4 billion re­finery.

According to Deep Earth International (DEI), a market research firm that covers developments in the extractive and energy sectors in East Africa, according to the government’s schedule, the talks for the PFA were sup­posed to have been concluded in Septem­ber.  That deadline was missed and it is not clear when the two parties will conclude the negotiations. 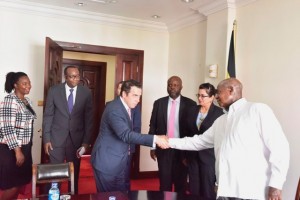 In October, representatives of the consortium met with President Yoweri Museveni seemingly to seek further political backing for the $4 billion project.

Uganda, through the national oil compa­ny, is expected to take a 40% stake in the refinery, while the investor carries 60%. Up to 70% of the financing of the refin­ery will be through debt with the other 30% coming in as equity from the project partners. In August, the government an­nounced that it had “agreed core project terms” for the refinery project.

DEI says when the consortium signs the PFA, they will be required to finance all pre-Fi­nal Investment Decision activities up to $100 million. The Pre-FID activities, ac­cording to the terms of the arrangement, will include market studies, logistics stud­ies, technology licensing, refinery config­uration studies, Environmental and Social Impact Assessment, and Front End Engi­neering Design.

For now, a consultant that government chose, Kaika Investco, is already monitor­ing and evaluating the Resettlement Ac­tion Plan for the people who were evac­uated to pave way for the construction of the refinery.