March 15-The government needs to integrate more its annual budgets with the National Development Plan (NDP), […] 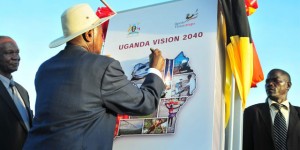 The latest paper from the EPRC pushes the view that unless more taxes are collected Uganda will not realise its Vision 2040.

March 15-The government needs to integrate more its annual budgets with the National Development Plan (NDP), if it’s goal of lifting Uganda into the middle-income bracket by 2040 is to become a reality and toughen up on tax exemptions to reduce budget deficits.

The latest publication from the Economic Policy Research Centre (EPRC) titled ‘Linking Budgets to Plans in a Constrained Resource and Institutional Environment: The Case of Uganda,’ points out that institutional weaknesses undermined budget outcomes during the first NDP.

In their paper, Corti Paul Lakuma and Musa Mayanja Lwanga, say Uganda needs to address these key weaknesses to improve the performance of subsequent NDPs if the country wants to attain middle income status. The EPRC is Uganda’s foremost economics-oriented independent think-tank.

There continues to be large differences between revenue forecasts and out-turns at both the aggregate and sectoral levels which has led to poor budget performance outcomes.  The authors say this is one of the major reasons that hindered the success of the first NDP.

‘The discrepancies between budget and out-turn were largely the consequences of revenue forecast errors, mainly driven by shortfalls in domestic revenue and changes in donor financing. While the adverse shocks driven by economic conditions were largely unpredictable, the permanent shock – caused by an assumption that the budget would grow at 0.5 percentage point – was predictable and undermined budget credibility’, the paper reads in part.

The authors suggest some tough measures like minimizing tax exemptions which happen to be a leading incentive for foreign and some local investors.  Tax exemptions have long been seen as a vital tool to speeding up growth of the private sector, but several influential institutions, including the International Monetary Fund, have called for an urgent rethink. The problem remains ‘briefcase companies’ that exploit all the available incentives before disappearing into the night with their profits.

Lakuuma and Lwanga suggest a wider VAT coverage and improving the efficiency of tax collection is crucial for eliminating discrepancies between budgets and their out-turns. Referring to the poor performance at sectoral level resulting from underfunding, the paper advises the government to strengthen its resolve to increase domestic resource mobilisation, reduce the size of the informal sector and prioritise public spending and improvement of value for money through the implementation of efficiency measures.

The study also observes that achieving success is not a one man job, but requires the input of a joint team effort from the Ministry of Finance, the Parliament, civil society, and think-tanks, each with a different role to play in a transparent and accountable manner.

The study points out that although the suggested measures may not turn around the economy all at once, by adopting some of the measures may help to guarantee government targets.