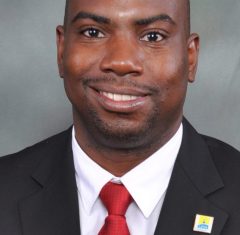 May 12,2018 – Uganda would need to ramp up its tax to GDP ratio to 20pc before the national budget can be funded 100pc from domestic sources.

Domestic revenues have contributed 64.5pc of the annual expenditure over the past three fiscal years from a tax to GDP ratio that averaged 14.1pc over the period.

URA’s Commissioner for Customs Mr. Dicksons Kateshumbwa says this is however still too low and leaves the country exposed to a development gap. Addressing representatives of digital media at URA headquarters on May 11, Kateshumbwa said the public will need to become more receptive to revenue enhancement and consolidation measures for the country to become self-sufficient. This would require them to support measures to spread the tax burden across new revenue sources and to support efforts to curb leakages occasioned by smuggling.

“When you allow smuggling, you promote a mafia economy. This hurts development and job creation because long term investors find it hard to sustain their businesses while individual with short term interests, who don’t employ anybody get rich,” Kateshumbwa said.

Enforcement operations to curb the vice have recovered UGX 43 billion on average annually over the past few years, he revealed. But this was only the tip of the berg and more value would be recovered if the public became more proactive, giving information on evaders.

Smugglers were also becoming more sophisticated. Last weekend, enforcement staff intercepted a Tanzania registered bus whose owners had welded in a hollow chamber running the entire length of the bus in which smuggled goods were recovered.

Rice, sugar, wheat, cigarettes and cosmetics are the most smuggled goods. Uganda’s northern borders have become particularly notorious for backflows of sugar from South Sudan which is causing a problem for Ugandan manufacturers.

Kinyara Sugar Works in western Uganda has been hit hard and was found to be stranded with 18,000 metric tonnes of sugar it has failed to sell.