October 5—Participants at the Sixth Annual Mineral Wealth Conference in Kampala have been regaled of Uganda’s opportunities to lucratively exploit its natural resources if the issue is given more priority. 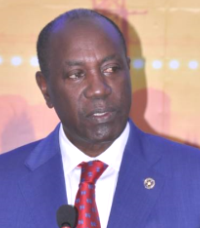 Dr. Karuhanga suggested Ugandans should begin to heed the knock on the door to mine wealth.

In his opening remarks, Dr Elly Karuhanga, the Chairman of the Uganda Chamber of Mines and Petroleum (UCMP) said, “We have not been listening to our minerals ‘knocking on our door’– asking to be exploited so as to make us wealthy. By choosing this theme ‘Minerals: Knocking on the door to cause economic transformation in Uganda’ we at the UCMP are again asking everyone to listen to this knock and do all that is necessary to gainfully exploit these natural riches so that Uganda can develop.”

Albert Muchanga, the Commissioner for Trade and Industry at the African Union Commission secretariat in Addis Ababa said Africa,and  particularly Uganda, is very blessed with natural resources and yet it continues to suffer from economic hardships mainly because of poor policies and management.

“What Africa needs is to refocus, identify its priorities and work hard towards achieving those priorities. We have the resources that could make Africa a first class economic continent, however we continue to lag behind due to inefficiency of the available polices,” Muchanga said.

About 500 local and international delegates heard speakers explaining the need for governments to put in place strong policies that formalize the mining sector as well as make is more commercially viable to spur economic growth. The conference is also building on the successes of the past five years among them the gains made on the previously prohibitive tax regime which was a major deterrent to mining investments.

Edwards Katto, the Director, Directorate of Geological Survey and Mines (DGSM) said recent changes in the legal and policy framework should help make Uganda more attractive for high value foreign direct investment. Some of the changes include the introduction of competitive licensing for Brownfield instead of allocation of mineral rights in a non-competitive system that encourages speculators. Brownfield exploration, also known as near-mine exploration, refers to areas where mineral deposits were previously discovered.

Katto said there is also need to regulate building (development) minerals such as clay, murram, sand or any stone commonly used for construction which were excluded from the definition of minerals in Article 244 (5) of the Constitution. “We also need to encourage optimization of the fiscal benefits from mining, promotion of local content and value addition as well as management and regulation of artisanal and small scale mining activities,” he said.