September 11, 2017 in Editorial, Opinion by Editor

September 11—Whenever the subject of refugees comes up, Uganda is cited as having one of the […] 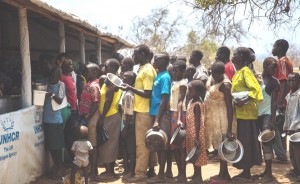 The UN refugee agency says it urgently needs funds to cater for the over one million South Sudanese refugees in Uganda.

September 11—Whenever the subject of refugees comes up, Uganda is cited as having one of the best policies in the world. So you wonder why so few wealthy countries are willing to help out.

Prominent global personalities have admired how these hapless people have been integrated in Ugandan society in ways that try to restore dignity rather than diminish it.

At present, Uganda is host to just over a million refugees, mostly women and children from South Sudan. They are allowed to work, send their children to school and when possible, do some farming to supplement food rations. This generosity is exceptional, but also costly and the government is struggling to cope, on top of providing for its own citizens, who it has be said are not above grumbling themselves.

Admittedly, the facilities and services on offer are not the best and if it were not for the support of several international NGOs, the situation would be much worse, however it is the thought that counts.

What is urgently needed are medicines, building and scholastic materials, farming implements, the kind of things that inspire desperate people not to give up hope.

Yet when the government, together with the United Nations High Commissioner for Refugees and World Food Program, hosted a donors meeting during mid-year, there was an awkward atmosphere hanging over the event. The reason would become clear soon enough.

António Guterres, the UN Secretary General said at the opening, “It is necessary for the international community to recognize that Uganda has had an exemplary refugee policy in the past and, even today faced with the largest refugee in-flow of the past year, Uganda remains a symbol of the integrity of the refugee protection regime that unfortunately is not being respected everywhere in the world.”

After the expected applause, there was very little of the expected money.  A joint request of $8 billion over four years was on the table. By the end of the Summit, just under $400 million was in the bag. The government put up a brave front, but probably the disappointment must have been quite acute. The UN refugee agency said it needed $1.4 billion and would run out of money by the end of this month.

Perhaps asking for $2 billion a year is on the high side, but Germany spent about $20 billion during 2016 in its scheme to take in and integrate a million Syrians. Angela Merkel, the Federal Chancellor, won both praise and condemnation for this extraordinary gesture, but at least her government could afford it. One cannot say the same for Uganda.

Germany’s GDP in 2016 was nearly $3.5 trillion while Uganda’s was $25 billion. Admittedly $20 billion is a huge outlay, no one can deny that, but it is still just 5% of that country’s GDP and also nearly equivalent to all the wealth Uganda generated last year.

Perhaps this is what convinced Merkel to dispatch Sigmar Gabriel, Germany’s Foreign Minister to undertake a fact-finding mission recently and see how much more Germany can do. Berlin has already committed $14 million to date.

Uganda is living up to its international obligations while many far wealthier countries are reluctant to do so. Shouldn’t that be rewarded? The country may not rank highly on the Transparency International index, but Sarah Jackson, Amnesty International’s Deputy Regional Director for East Africa, the Horn and the Great Lakes said, “It is time for other countries to bear their share of responsibility and do much more to alleviate the unsustainable pressure being placed on Uganda. Failure to do so undermines Uganda’s progressive refugee policy and could result in an even worse humanitarian crisis than we are currently witnessing.”

The real culprits in this unfortunate affair are the bickering leaders in South Sudan, ironically a potentially wealthy African country in its own right. They have been squabbling over sharing the national cake since just after independence in July 2011 and now you wonder what they will do when there is no cake at all. Meantime, 1000 South Sudanese cross into Uganda everyday.

Distance has a funny way of playing tricks on one’s perspective. Since these million South Sudanese refugees are far away from American, European or Japanese shores, there is a misplaced comfort that this is not our problem. What we often forget, it is within the ranks of the hopeless where the terrorists of the future tend to come from.