Uganda in no hurry to begin oil production 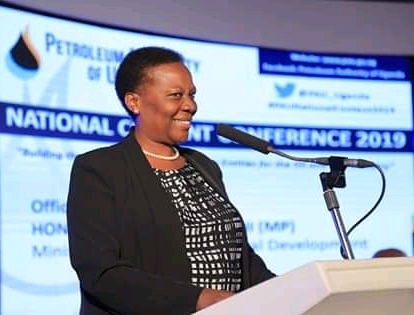 The government has once again pushed back the year when First Oil would begin flowing to the market place. This is no surprise however it was also clarified that the government is in no hurry unless everything is in place including agreeing on various contractual obligations with the different parties involved.

“We are taking our time so that we do not make any mistakes. We want to make a good deal for Ugandans. There is no sense in rushing to produce the First Oil and then we end up like some oil-exporting countries that made decisions first but suffered later,” she said. Eng. Muloni was speaking during the first National Content Conference for local suppliers hosted by Petroleum Authority of Uganda (PAU) in Kampala.

According to the Minister, the delays are to ensure that Uganda receives the most benefits from its estimated 1.5 billion barrels of recoverable oil once production begins. Accumulated discoveries put Uganda’s reserves at 6.5 billion barrels, much of it located in the western Rift.

While works on several key support infrastructure is underway, she said the government is still waiting on the oil companies to fully commit with Final Investment Decisions (FIDs). Most notable being construction of the oil pipeline to the Tanzanian coast and a new 30,000 bpd refinery. A network of 600 kilometres of new roads is also being built under the supervision of the Uganda National Roads Authority.

Total E&P and China’s, CNOOC (Uganda) Limited have both expressed commitment to make their FIDs by mid-2019. Construction of the 1445 kilometre pipeline is expected to begin immediately after that.

Muloni told suppliers, “Our oil is still in its natural host and no one is charging us for storing it. However, for us to start pumping it out, we need to have where to store it. We decided that we needed add value to the crude oil and locally produce Diesel, petrol that we have been importing. This is intended to maximize benefits to Ugandans. We however also want to export our oil. We are waiting on the oil companies to make the final decision, so that the selected oil pipeline passage from Hoima to Tanga is started on.”

She said the oil companies will need three to four years to complete infrastructure and actual production begins which may push First Oil to even beyond 2022.

The Minister asked local suppliers to focus on creating partnerships with bigger companies so as to improve their competitiveness and chances of winning contracts. The conference brought together all Ugandan companies that have expressed interest to supply to the oil and gas sector. Participants had a chance to share experiences and network during the event which nearly 1000 people including government technocrats.

The Executive Director of PAU, Ernest Rubondo said the conference creates a platform for the stakeholders to take stock of the journey that successful Ugandan companies have gone through so that they can act as an example for others.

He said, “It also gives a platform to share lessons learnt and the expectations of the oil companies from the potential suppliers in terms of quality, timeliness, health and safety factors.”

The conference was attended over 800 private suppliers, oil companies’ officials, government officials in the oil sector.