KAMPALA, AUGUST 10 – As the drama of Uganda’s spiral towards anarchy continues, Inspector General […] 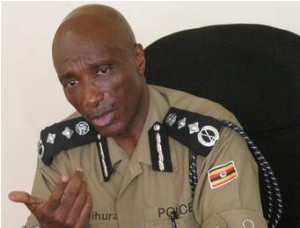 KAMPALA, AUGUST 10 – As the drama of Uganda’s spiral towards anarchy continues, Inspector General of Police Gen Kale Kayihura is now a fugitive from the law after he snubbed summons to appear before court for the second time.

Kayihura who is facing criminal prosecution by a group of private legal practitioners who accuse him of abetting human rights abuses through using goons to launch indiscriminate and brutal attacks against opposition supports and innocent bystanders was due to appear in the Magistrates court in Kampala’s Makindye Division today but neither he nor his legal reprsentatives were in court.

Instead, a rowdy mob of “Crime Preventers,” a violent regiment of thugs that have been working alongside the police to beat up opposition supporters surrounded the court premises protesting the IGP’s innocence. At the court the lawyers had to to be whisked from court premises under tight police guard from the police that did little to disperse the rowdy mob. City Mayor Erias Lukwago and a City Councilor had to be taken from the court in police vans after it became risky for them to drive away in their own private vehicles.

Yesterday, a group of youth who claimed to have been hired by opposition leaders to frame the IGP tried to stage a protest at parliament in an attempt to block the trial.

Commenting on the developments, a private legal practitioner described the actions of the IGP’s supporters’ as puzzling.

“The IGP is a lawyer by training and am certain he is familiar with the workings of the law. If he believes he is innocent, the place to argue his case is the courts, not mob action,” he said.

While Kayihura’s actions cast Uganda as a country where rule of law has collapsed and suggest an ongoing internal power struggle within the ruling National Resistance Movement, some analysts have described the Generals decision not to honour the court summons as the only tactical open to him, at least until president Museveni takes charge of the rapidly unraveling situation.

“I think his decision was the better of two devils. The courts are independent and the magistrate could easily order that he be remanded. His police guards would have nothing to do since at that point the prison authorities would immediately takeover. If he resisted going to the “University of Understanding,” the result would be an ugly standoff between agencies of the state which would not cast the country in a good light,” he said.

After a few weeks of confusion the NRM appeared to be finally getting its act together after the Director of Public Prosecutions today, applied to take over Kayihura’s prosecution from private lawyers. Court rules on the appliaction on August29.