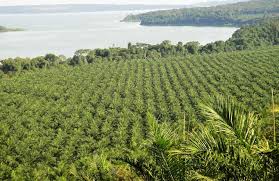 A section of Wilmar’s plantation in Bugala, Uganda

KAMPALA, APRIL 1 – A small Ugandan farmers group that accuses global commodities giant Wilmar of land grabbing could soon have reason to celebrate as it emerges that the company has suspended plans to further expand palm oil growing in Uganda.

256BN has learnt that fearing a backlash from its activities in west, central and east Africa, Wilmar is in retreat and has pulled the brakes opening a new 6000ha oil palm plantation in Buvuma’s islands. According to donor sources and a highly placed official in the Ministry of Agriculture, Wilmar has through its Ugandan affiliate Bidco communicated a decision not to own a nucleus estate on the island but instead support small-holder farmers to open up the new plantation.

Wilmar has been on expansion drive in Africa and the Ugandan decision represents a shifting strategy that places emphasis on acquisitions rather than Greenfield developments. Wilmar which holds 60 percent of the stock in Bidco Uganda has recently taken over Unilever palm estates in West Africa, taken  control of Murzah oil, the largest soap and oil manufacturer in Tanzania and bought Willerton of South Africa.

While the decision on Uganda was communicated as early as 2015, it is understood government officials have tried to keep in under wraps for fear that encroachers could resettle on the 6000ha piece of land the state had secured for Bidco. 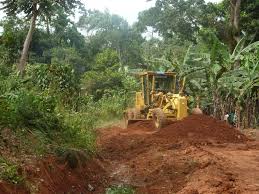 A grader opens up land formerly occupied by a farmer in Bugala, Uganda

This development is bound to be seen as a big victory for environmental activists and peasant farmers in Bugala, the largest island in the Ssese isles who have long accused Bidco of shortchanging the local communities in land transactions and enlisting state agents to bully others off their land.

In a petition delivered to the UNDP Kampala office on 28 January, the Bugala Farmers Association accused the UN agency of colluding with Bidco dispossess them.

“We express our deep disappointment that UNDP has met our plea for action with silence,” the association said. “After being shunned by UNDP staff in Kampala and not receiving any response to our petition in almost a month, we have no reason but to conclude that Bidco is influencing the UNDP as well,” the association said in a statement January 28.

The Bugala farmers have taken Bidco to court in Uganda to reclaim 600 hectares of smallholder farms the company seized to make way for its nucleus palm oil plantation on Bugala. Although the farmers secured an injunction against any further expansion of the plantation, Bidco has refused to comply with court orders.

Bidco has argued that it is merely leasing the land from the government, a claim the farmers refute. The government has also issued statements that there was no destruction of natural tropical rainforests on Bugala to make way for the plantation but site visits suggest otherwise.

The project ran into early trouble when the World Bank, that initially supported the project, withdrew concessional lending in 2004, after concluding that Bidco’s plantation did not comply with the bank’s anti-deforestation policies.

A senior government official who says the state may consider hunting for a new investor to develop the nucleus estate told this publication that Bidco’s decision cannot be separated from the global backlash Wilmar is facing amidst accusations of unethical conduct in the way it has conspired with authorities to dispossess poor peasants in eastern and western Africa of their land holdings and other intangible values associated with access to natural forests.