October 24—Hippo teeth remain in high demand in Hong Kong and Uganda along with Tanzania, are […]

October 24—Hippo teeth remain in high demand in Hong Kong and Uganda along with Tanzania, are cited as providing 75% of all supplies according to CITES, the international anti-trafficking organisation. 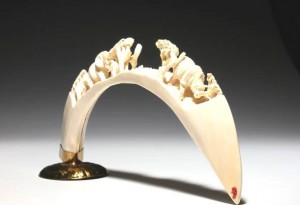 Finished items can sell from as little as $20 to several thousands of dollars for carvings made to order.

Hippopotamus teeth are considered an ideal alternative to elephant tusks for crafting the various carvings and other artifacts cherished in the Far East. Hippo teeth are said to yield superior ivory. Finished items can sell from as little as $20  to several thousands of dollars for carvings made to order.

Dr. Andrew Seguya, the Executive Director of the Uganda Wildlife Authority (UWA) puts the blame on the country’s porous borders that allow traffickers to use it as a transit point.

A similar situation is seen in the gold business. Uganda’s domestic production is modest to say the least, but during 2016, the country exported over $300 million worth of the precious metal. Other sources say, the most likely source of the hippo teeth consignments, is eastern Democratic Republic of Congo that neighbours Uganda.

Although the Uganda government banned the hunting of hippos in 2014, a recent study published in the African Journal of Ecology by researchers from the School of Biological Sciences at the University of Hong Kong, shows significant discrepancies in the official trade volumes of hippo teeth between the two countries and the Chinese city.

Exact figures of how much the trade is worth on an annual basis are lacking, but the researchers examined records dating back to 1975. The study states that to date, 14,000 kilogrammes is unaccounted for between Uganda and Hong Kong, representing more than 2,700 individual hippos – two percent of the global population.

Referring to Tanzania, records show Hong Kong had received 3.2 tonnes more hippo teeth than Tanzanian authorities claimed to have exported to the city.

Alexandra Andersson, head researcher said, “If authorities do not more diligently monitor the international trade in threatened species, those species could be exposed to unmanageable exploitation levels, which could lead to extinction.”

As far as UWA is concerned, the only legal trade in hippo teeth is that originating from hippo carcasses and nothing else.