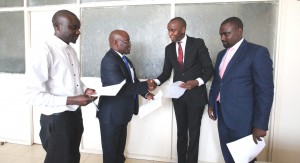 Asiimwe (left) seals the arrangement with Mugisha which will see UCA member cooperatives to get better legal advice and representation.

“The purpose of this MoU is to help cooperators with legal information and capacity building for them to be able to walk the right legal path,” Ivan Asiimwe, the UCA General Secretary said early this week.

For the next two years, Puliida will offer legal expertise and help with relevant training as well as represent UCA members when called to do so. The firm will also carry out research development and conduct field legal clinics where logistically possible.

Moses Mugisha, a Puliida official said, “Our job will be to train UCA members and willing lawyers who are going to offer litigation services to cooperators so that they understand what is needed in court for cooperative issues.”

Puliida Uganda Limited is an award-winning legal, regulatory, and policy Not-for-profit Company  and consists of a network of activist lawyers who volunteer to provide legal assistance for farmers and agribusinesses. These are the same areas of activity most UCA members are involved in which makes for an easy fit.

UCA, which was first formed in 1961, comprises of Saving and Credit Cooperatives (SACCOs), Area Cooperative Enterprises (ACEs), District, Regional and National Unions and Tertiary Cooperatives. All these have direct membership and access to UCA services and benefits.

Asiimwe said several cooperatives have been complaining about continuously losing court cases, mainly because they have not been receiving the right legal advice. Consequently, UCA felt the need to contract a legal entity that will help guide them in future.

Mugisha said the reason for these difficulties is many cooperative have not been following the proper legal procedures in handling contracts which frequently led to ending up on the wrong side of law and losing cases.

“This is what we are going to help them with. We are going to make sure the cooperatives have the guidance to do proper documentation before they enter into any transaction,” he said.

He said some lawyers who have been representing cooperators also lacked the experience and appropriate legal training to handle cooperative cases.