October 2— Uganda has been admired for its natural attractions, but maintaining a positive image abroad […]

October 2— Uganda has been admired for its natural attractions, but maintaining a positive image abroad is essential in sustaining visitor interest. 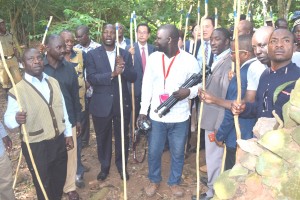 A stout stick is a useful item for negotiating pathways and the rugged terrain one encounters on some trails in the Sesse Islands.

The Netherlands Ambassador to Uganda, Henk Jan Bakker said recently, “This will only be possible if the country is able to polish its image from source destinations. This is because tourism is very sensitive. The images of MPs fighting with security men in parliament are being seen worldwide.”

He was a being hosted at Lutobokka Golf Course in the Sesse Islands on Lake Victoria. The islands are widely touted for the sense of the exotic and have increasingly become a popular destination.

Last week, several legislators in the national Parliament were involved in a brawl sparked off by the ruling National Resistance Movement government, tabling a motion to amend the Constitution and do away with age limits for the presidency.

Amb. Bakkek said tourism is the next big thing the world over as it creates jobs, is a source of foreign exchange and earns the state revenues. Currently Uganda is receiving about a million visitors a year..

Bakker said, “Uganda has the potential to reap from the growth with its diversity of attractions like; The Source of River Nile, Mount Rwenzori and national parks.”

On World Tourism Day, the Ambassador was among a group of visitors that toured sites on Sesse Islands. South Korean investors scouting for business opportunities agreed with the envoy during a visit to Victoria Forest Resort. 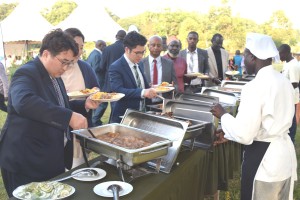 The food was not the only thing that caught the interest of these potential investors from South Korea.

Seung Kwon, the Director Green Climate Technology said, “Nature is still here. That is what a traveler wants. To get away from concrete and glittering lights they want to see the crickets chirp in the wood and the birds tweet in flight. Besides the sun, visitors from Korea want to witness different cultures, see the reptiles, mammals and plants here.”

Resort owner, Christopher Kamukama said, “There is need to improve the entire chain of service in Kalangala (Sesse) and this 40-bed resort, that costs between $60 -$200 a night is just a starter. Tourism has the potential to improve the lives of the residents by providing jobs and market for their agricultural produce.”